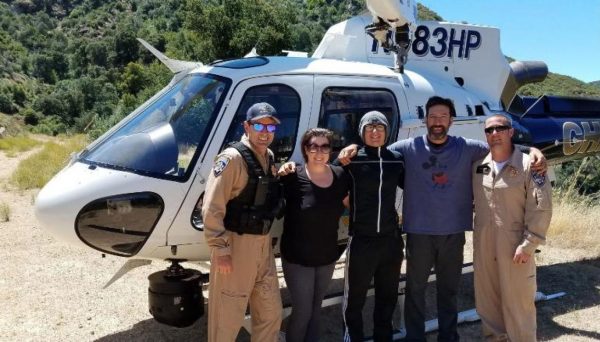 A trio of Morro Bay residents were stranded atop a waterfall during an adventure in Monterey County but were rather quickly rescued after placing a help message in a water bottle and floating it down a river. [Tribune]

In June, Curtis Whitson, 44, took his 33-year-old girlfriend, Krystal Ramirez, and his 13-year-old son, Hunter, on a hiking and tubing river adventure. Whitson runs a full-service operation for doors, windows, screens and glass, and Ramirez is a bartender at Rose’s Landing on the Morro Bay Embarcadero.

Setting out with 50-pound backpacks, the trio began their trek at a campground near the community of Gonzalez. About two days into the trip, they spent a morning navigating the Arroyo Seco River in an isolated area of the Los Padres National Forest.

That leg of the trip concluded with the trio reaching the top of a 40-foot waterfall and becoming stuck.

Whitson had traversed the route on the same journey seven years prior. He brought rope to rappel down a nearby rock face on the river.

But unlike on the previous trek, there was a much stronger, faster current following a winter of above-average rainfall. Whitson said it was slippery and too dangerous to risk rappelling.

The group tried yelling for help after hearing voices off in the distance but to no avail. They also considered retracing their steps but figured that could lead to confusion for rescuers since they had not seen anyone for miles

At this point, the trio were running low on food and figured a traditional rescue effort could take too long.

Whitson decided to write “GET HELP” on his Nalgene water bottle and float it downstream. Realizing the words might not get noticed, he asked Ramirez if she had a pen and paper.

Ramirez said she brought some writing materials for keeping score in card games. Whitson wrote “6-15-19 we are stuck here @ the waterfall get help please,” stuck the note in the bottle and set the bottle afloat.

The trio also used rocks to write “SOS” in the location they were stuck. At night, they lit a campfire and went to sleep.

At about midnight, they woke up to the sound of a CHP helicopter circling overhead.

The CHP crew used a loudspeaker to tell the trio to stay put until the morning when the helicopter would return. The helicopter indeed returned, and they were airlifted to safety.

Later, Whitson learned two hikers had spotted the water bottle and reported it at the Arroyo Seco campground. Whitson said he cannot thank the hikers enough.

Whitson said the experience of using a message in a bottle to get rescued was like something out of the movies. 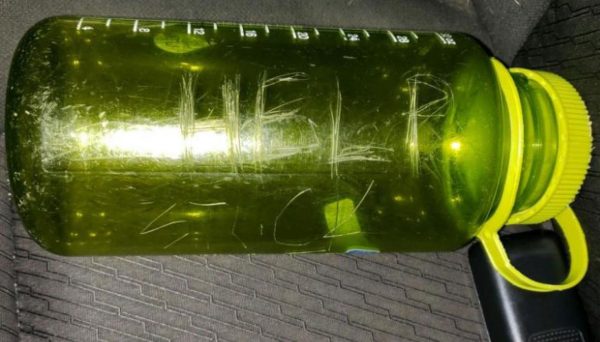