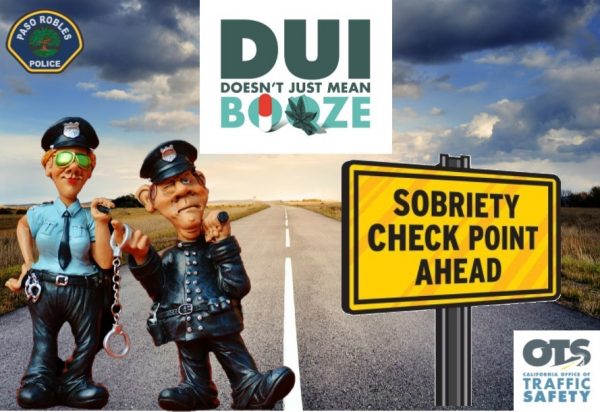 Paso Robles police announced plans to conduct a DUI checkpoint in the city at an undisclosed location on Saturday evening from 6 p.m. to 2 a.m.

The department selects the location based on the number of previous accidents and the frequency of DUI arrests. Officers check licenses and insurance while looking for signs of impairment.

During the past 12 months, Paso Robles officers investigated nine DUI collisions in which three people were killed and seven others were injured.

“If you take prescription drugs, particularly those with a driving or operating machinery warning on the label, you might be impaired enough to get a DUI,” according to police. “Marijuana can also be impairing, especially in combination with alcohol or other drugs, and can result in a DUI.”

• Always use a designated sober driver – a friend who is not drinking, ride-share, cab or public transportation – to get home.

• See someone who is clearly impaired try and drive? Take the keys and help them make other arrangements to find a sober way home.

• Hosting a party? Offer nonalcoholic drinks. Monitor who are drinking and how they are getting home.

Drivers charged with a DUI can expect it to cost upwards of $13,500. This includes fines, fees, DUI classes, license suspension and other expenses not to mention possible jail time.