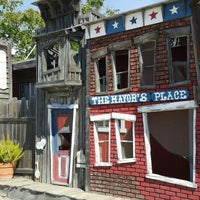 At least one thief broke into The Mayor’s Place restaurant in Nipomo last week and took money from the cash register and donations to a local charity. [KSBY]

A burglar forced open the back door causing about $700 in damage, pulled out the safe, took approximately $600 from the cash register and about $100 in donations to the Santa Maria Valley Humane Society. Workers at the The Mayor’s Place spotted the damage when they arrived to work early Wednesday morning.