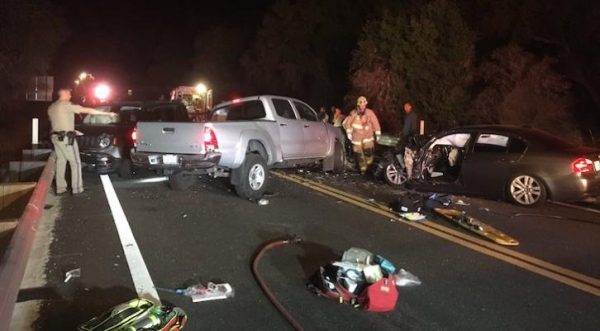 Shortly after 7 p.m., Lt. Javier Antunez, 44, was driving a BMW eastbound near Lake Cachuma when he crashed head-on into a westbound Toyota Tacoma driven by Enrique Calderon-Mendez, 43, of Santa Barbara.

Also headed westbound, a 28-year-old Santa Barbara woman in a Jeep crashed into the back of the Toyota. She suffered minor injuries.

Both Antunez and his passenger, Esther Emiko Trejo, 48, were transported to a local hospital with major injuries.

An air ambulance transported 43-year-old Judith Hall, a passenger in the Toyota, to a hospital for treatment of major injuries. Two other passengers, Dolores Gutierrez, 60, and Evelia Dominguez, 48, both received moderate injuries. The driver, Calderon-Mendez, suffered minor injuries.