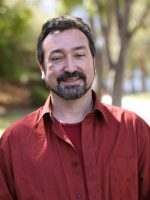 A tenured Cal Poly professor in the psychology and child development department pleaded no contest on Monday to a misdemeanor charge of using his cell phone camera to record up-skirt footage of his female colleague.

Meanwhile, the victim in the case, who spoke in court on Monday, is alleging Cal Poly placed a gag order on her to save face, and the university is failing to provide adequate support to victims of sexual assault. [Tribune]

Jason Alan Williams, 53, pleaded no contest in San Luis Obispo Superior Court to using an electronic device to view a person’s undergarments for sexual arousal. Under a plea agreement reached with prosecutors, Jason Williams will receive a sentence of five years probation, during which he will be subject to searches of his electronic devices and ordered to stay away from the victim.

Despite his conviction, Jason Williams remains on Cal Poly’s payroll and is suspended, pending the outcome of a university disciplinary process. Jason Williams is a tenured associate or assistant professor, who has taught at Cal Poly since 2008.

On May 2, 2018, Kendra Williams stepped into the psychology and child development department mailroom following a lecture. Jason Williams entered the room, as well, and started engaging her in small talk.

“You stood so quietly behind me, preparing your phone. Then you bent down and placed your phone between my legs,” Williams said. “I was looking at a pay stub when I felt something touch the inside of my right leg. When I looked down, I saw your phone being held by you with the flash engaged, pointed up my skirt, taking images of my body.”

The female professor reported the incident to campus police. Officers detained Jason Williams at the University Police Department and later booked him into the San Luis Obispo County Jail.

In court on Monday, Kendra Williams said she was made into an object for the sexual pleasure and fetish of her colleague, a tenured professor.

Kendra Williams has also spoken out over the university’s handling of the incident.

When she returned to teaching in fall 2018, Kendra Williams was not allowed to discuss the incident because Cal Poly’s Title IX investigation imposed a gag order on her, she said. The female professor said she was only allowed to tell her students she was absent because of a personal matter.

Cal Poly was not being honest and was using Title IX to limit her speech and save face, Kendra Williams said.

In a statement to Cal Poly President Jeffrey Armstrong, Kendra Williams said that the university’s investigation into the incident was mishandled, its system for supporting sexual assault victims is inadequate, and that Cal Poly does more to protect perpetrators and the university’s reputation than it does for victims.