I was walking Wilbur down the uneven, puddle-ridden dirt alley behind the Cayucos Tavern, antique emporiums, and real estate offices on the main drag, a kind of no-mans-land, when this officious looking guy around 30 popped out from behind a wooden fence like a jack-in-the-box to ask me in a truculent manner if I was picking up the poop when my dog shit in the alley. I was somewhat flummoxed by the immediacy and stridency of his demand, and at first could not find the usual words of protest at such an accosting.

But I did finally manage to utter, “Have you seen me not pick up my dog’s shit in this alley?”

He studied me, a well-dressed fellow, clean shaven, upright, possibly suspicious because I held no plastic sack of dog poop in my hand, and Wilbur was off his leash.

“Well, no, not yet, but a lot of people walk their dogs down this alley and think it’s okay to leave their poop here, like this is dog poop alley. It’s unsanitary and gross.”

“What makes you think I’m one of those culprits?” I asked.

“I didn’t say you were one of the offenders. I just asked. Do you have poop bags?”

“Who the hell are you—the dog poop police?” 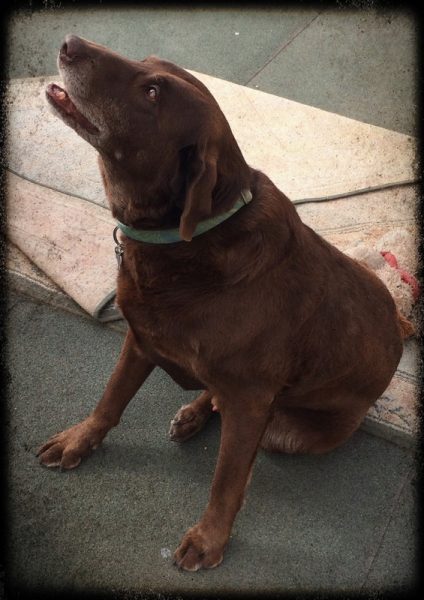 “You can take my word as a person who’s lived here for thirty years and always had dogs and would never abuse my citizenship. But, if you must…” I yanked a cluster of plastic poop bags from my pocket and thrust them toward the nerd. “See? Poop bags! Satisfied?”

He sort of flinched. “Yes, I am. And thank you. It’s just that, well, so many people have dogs in town, and people bring their dogs to town because we have dog-friendly hotels everywhere and nobody obeys our leash laws. And these people, locals and tourists alike, seem to think they have a license to allow their dogs to poop everywhere and not clean it up. I mean, these tourists even let their dogs poop on sidewalks and walk away cavalierly, like it’s no big deal.”

He had a good point here. “Well,” I said. “I’m not one of those. I’m a conscientious poop-scooper, okay with you?”

“Yes. Sorry if I was overbearing.”

I walked off, and, truth is, while I do scoop up Wilbur’s odious, reeking poop on the beach and in the streets and on lawns, and especially in areas where people might squish there shoes in his shit, I’ve observed the occasional poop-scooper offender; and also dealt with self-appointed dog poop police on the “dog beach” south of town who’ve regarded me with suspicion. I always make a show of picking up Wilbur’s poop, and receive nods of approval.

But this nerd! Well, I forgot about him hanging out in such an obscure area like the dirt alley, one of the least traveled places in town, until I ran across him along the seawall, just off the pier, beside the public restrooms, where he was obviously asserting firm surveillance of possible dog poop evaders and catching them red-handed.

I’m not sure he recognized me. I get a haircut every six months and sometimes wear a cap, or allow the hood of my hooded sweat jacket to cover part of my face, and sometimes not. This morning, as I walked along beside the seawall and allowed Wilbur to sniff and pee on the beach nearby, I had the hood up and the NYPD emblem on the chest fully exposed.

He was watching Wilbur, and issued me a sour look when Wilbur pissed on one of the little miniature seahorses toddlers like to ride.

“Did you see that?” he said with a prissy scold.

“Your dog urinated on that horse children ride every day. It’s unsanitary, to say the least.”

“The reason Wilbur pissed on that horse is because a thousand other dogs have pissed on it.”

“Oh, and that makes it right?”

“You could clean it off.”

“You clean it off,” I retorted. “Officious twerp!”

“You heard me. My dog can pee where he wants. And you can go fuck yourself!”

“Oh, that’s great.” He shook his head in dismay, obviously not used to such profane abuse, then girded up. “Well, you go fuck your-self, asshole!”

“You go fuck yourself, ass-hole!”

“Fuck YOU-UUUU!” he countered, as several locals looked on.

“Goddam miserable dog-poop puke,” I snarled, lurching toward him. “GO FUCK YOURSELF!”

He stumbled back. “Fuck you,” he countered. “And have a nice day.”

He fled. One of the county maintenance workers, a guy with a beard, came over and shook my hand. “That was awesome,” he said. “I’m twenty-nine years old, born and raised here, and these assholes like that jerk are trying to take over. They act like they own Cayucos. You’re not the first one he’s hounded.”

Patrick, a local, walked past, grinned with his bad teeth and flashed the peace sign. I was winded, heart beating too hard, almost dizzy from the adrenaline rush of my emotional barrage. I caught my breath. “Well, next time I’ll swat that puke,” I told the kid.

“I’m seventy-six years old, man. If he took me to court, a judge would laugh it off.”

He shook his head. “Not these days. Cayucos, the county, the world, it’s all changed. I thought you were going to hit him. I’m glad you didn’t.”

So am I. But if the puke sees me coming, he better cross the street. Meanwhile, Wilbur made sure to lift his leg and pee on the other miniature seahorse.