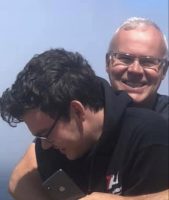 The parents of the Cal Poly student who was killed in a crash at a deadly Highway 101 intersection in Arroyo Grande filed a lawsuit on Tuesday against several government agencies, as well as the other driver involved in the crash.

On Oct. 7, Jordan Grant, 18, was riding his motorcycle southbound on Highway 101 near El Campo Road. A man living in the Falcon Ridge Estates on the west side of Highway 101, Richard Giuli, attempted to make a left turn onto the highway, pulled out in front of Grant’s motorcycle, killing the Cal Poly student.

Giuli recently pleaded no contest to misdemeanor vehicular manslaughter, which allowed him to avoid jail time.

The lawsuit, filed by James and Rebecca Grant, Jordan Grant’s parents, names SLO County, the city of Arroyo Grande, the state of California, the San Luis Obispo Council of Governments (SLOCOG) and Giuli as defendents.

The suit alleges the Highway 101 intersection lacked safety measures, including proper signage to reduce speed or warn drivers about the danger. And even though there was a history of crashes, authorities allowed the conditions at the intersection to remain unfixed.

James and Rebecca Grant are asking for an unspecified amount of damages.

Following the fatal crash, the Grants lobbied local officials and Caltrans to stop allowing left hand turns across four lanes of the highway while they look for a permanent solution to the danger that the intersection posed.