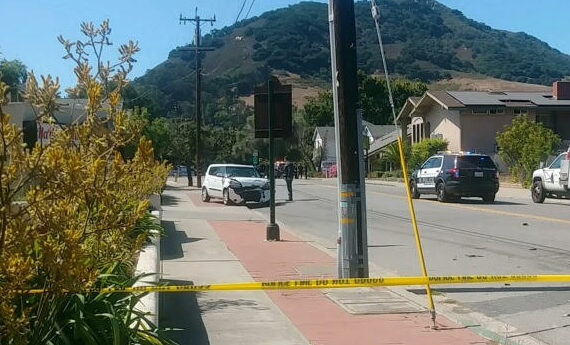 A pursuit that started Monday near Avila Beach ended in a head-on collision on Olive Street in San Luis Obispo.

At 11:14 a.m., a CHP officer spotted a gray Hyundai headed the wrong way on Highway 101 north of Pismo Beach. The driver righted the vehicle’s direction, but fled leading officers on a northbound chase.

At the Monterey Street exit, the suspect left the highway, made a U-turn, and headed southbound on Highway 101.

The driver then exited at Santa Rosa Street, before crashing head-on into a white sedan. Two occupants of the sedan where transported to a local hospital for treatment of minor injuries sustained in the crash.

For a short time, 46-year-old William James Meiborg of Atascadero refused to leave his vehicle and a standoff ensued. SLO police officers eventually arrested the suspect.