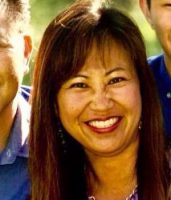 A San Luis Obispo judge sentenced Sherry Gong, the wife of SLO County Clerk-Recorder Tommy Gong, on Wednesday to almost six months in jail for embezzling more than $32,000 from the booster club of the Atascadero High School band.

Judge Jacquelyn Duffy also sentenced Sherry Gong to three years of probation and ordered her to not serve as a volunteer or in a position involving financial management. Duffy rejected a motion filed by Gong’s attorney to reduce her convictions from felonies to misdemeanors.

In a surprise move in August, Gong pleaded guilty to three felony counts of grand theft by embezzlement. Gong, who initially pleaded not guilty, changed her plea without reaching any agreement with prosecutors.

Before Gong entered her guilty plea, Duffy indicated she would grant probation but made no promise of how much jail time she would order Gong to serve. A defendant placed on probation for felony grand theft by embezzlement convictions can be required to serve a maximum of one year in county jail as a condition of probation.

If Gong violates her probation, she could be sentenced to state prison for the remainder of the maximum allowable sentence, which in Gong’s case, is four years and four months.

During Wednesday’s sentencing hearing, Gong said, “I feel sorry.” Gong had tears in her eyes as she made the remark. [KSBY]

A member of the Atascadero High band booster club read a statement saying Gong’s embezzlement of funds destroyed the financial security of the organization.

The criminal complaint filed by the district attorney’s office alleged Gong took $3,104 out of an Atascadero High School Band and Pageantry Booster Club bank account on about July 5, 2017. Then on about April 24, 2018, Gong allegedly lifted $19,000 from a second booster club bank account. Later the same day, Gong allegedly took another $9,850 from another of the club’s accounts.

Gong’s attorney, Guy Galambos, previously said in a statement his client admitted to taking funds from the booster club, though she “borrowed” the money to address a family emergency. Galambos’s account of the personal use of booster club funds did not match the time of the embezzlement allegations in the criminal complaint.

Gong tried to recoup the money by borrowing from extended family members and selling some of her jewelry, her attorney said. Gong admitted her actions in an interview with Atascadero police detectives and presented replacement funds in the form of a cashier’s check.

Tommy Gong, who has supported his wife amid court proceedings, did not learn of the embezzlement case until after his wife’s interview with Atascadero police, Galambos said. Tommy Gong was never implicated in the case.

Sherry Gong is scheduled to report to jail on Dec. 2.

2 Comments about “Sherry Gong sentenced to six months in jail”