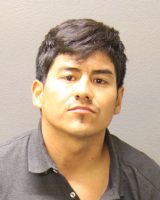 A felon, who has at least three prior DUI convictions, drove under the influence Wednesday night. He led Santa Maria officers on a chase during which he rammed a police car and crashed into another vehicle, injuring the other driver.

Shortly before 11 p.m., officers tried to stop a vehicle driving without headlights. The driver, 30-year-old Andy Mena, fled driving recklessly and at high speeds, according to police.

During the chase, Mena accelerated in reverse and rammed a police car.

Eventually, Mena crashed into the rear of a vehicle that was stopped at a red light at Blosser and Betteravia roads. Responders transported the injured driver to Marian Regional Medical Center, where he received treatment for pain.

Officers caught Mena and arrested him on charges of felony DUI causing injury, having an outstanding warrant and driving on a suspended license resulting from a DUI. Police booked Mena into the Santa Barbara County Jail.