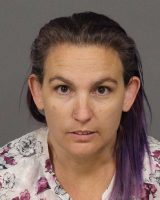 An investigation into Wilde’s activities began on July 9, when the owner of the Creston construction company reported to the sheriff’s office that his bookkeeper embezzled more than $47,000. Wilde reportedly took a check made out to a vendor for the construction company, altered the check and then deposited it in her personal bank account.

Over the course of the three-month investigation, deputies discovered numerous other company checks that Wilde deposited in her personal accounts. Wilde is currently in custody in the SLO County Jail with her bail set at $200,000.