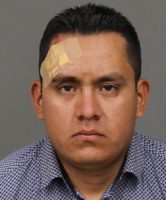 At about 2 a.m., Lorenzo Gonzalez Ortega, of San Miguel, was driving a small white sedan eastbound in the westbound lanes of Highway 46 near Mill Road, according to the CHP. Officers located Ortega’s vehicle near Whitley Gardens and tried to intercept it.

Ortega stopped his car facing east in a westbound lane, and turned the headlights off.

Officers quickly removed Ortega from the vehicle and moved the car out of the lane of traffic.

Officers arrested Ortega for DUI, driving with a suspended license and having multiple outstanding warrants totaling $145,000. Ortega is not currently in custody, according to the SLO County Sheriff’s Office website.