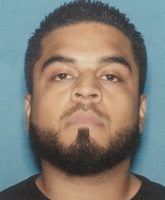 The Santa Maria Police Department is searching for a man they believe shot and killed a 33-year-old man outside a taco shop on Sunday.

Authorities consider Hernandez to be armed and dangerous. Police are asking anyone with information about Hernandez’s whereabouts to call 911 and not approach him.