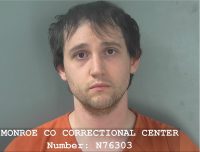 An Indiana man accused of driving to California, murdering his mother in her Grover Beach home, and driving back took the stand in his own defense this week. He testified the purpose of the cross-country road trip was to buy marijuana and an engagement ring for his girlfriend. [Tribune]

On Oct. 25, 2018, Grover Beach police officers found the body of Athena Valentiny, 64, lying inside her condominium. Valentiny was a California Men’s Colony nurse and the mother of Levente Laszlo Lazar.

Lazar, who is currently awaiting a verdict in his trial, is charged with first-degree murder and an enhancement for allegedly committing the crime for financial gain. If convicted of murder and the enhancement, Lazar faces life in prison without the possibility of parole.

Prosecutors allege Lazar drove to Grover Beach, plunged a sharp object into his mother’s neck up to 10 times, stole items from her condo and then drove back to Indiana.

Valentiny’s original will or trust was allegedly found at Lazar’s home after the Indiana man said he was the sole heir to his mother’s estate. Prosecutors allege Lazar intended to liquidate his mother’s estate to pay for his upcoming wedding to a trophy girlfriend, as well as to pay off tax liens and student debt.

On Wednesday, Lazar took the stand in his own defense. Lazar testified that he traveled to California to buy an engagement ring for his his girlfriend to whom he was planning on proposing. The Indiana man also testified the road trip to California was, in part, to buy about 15 grams of marijuana from a Los Angeles dispensary.

When he arrived at his mother’s condo, she was not there, Lazar testified. Without even getting out of the car, Lazar turned around and made the trip home, he testified.

Surveillance footage, however, showed a person matching Lazar’s appearance walking away from her condo on Oct. 24, 2018, the day the murder was alleged to have occurred.

The following day, Lazar made online searches with words including “suspect” and “murder.” Lazar testified he did so because, based on his phone conversations with his mother, he had an uneasiness that she might be in trouble.

Following Valentiny’s death, Lazar initially lied to a district attorney’s office investigator about his whereabouts at the time his mother died. In his testimony, Lazar said he lied to investigators because he feared being charged with drug trafficking.

Lazar said he got caught up in his lies, and his lies snowballed to the point where he became the prime suspect in his mother’s death.

In response to questioning about an alleged financial motive, Lazar testified his mother mailed her will to him, and he was assisting her with financial planning.

The prosecution and defense delivered closing arguments in the trial on Thursday. Jury deliberations are underway and will resume on Monday.