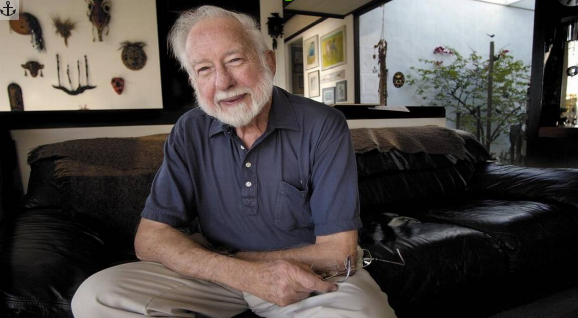 Kenneth Schwartz, best known as the father of Mission Plaza, a mayor of San Luis Obispo, a Cal Poly professor and an associate dean, has died. He was 94 years old.

Schwartz died Saturday at an assisted living home in San Luis Obispo. He had been suffering from multiple health problems.

A 70 year SLO resident, Schwartz had dedicated his life to education and public service, always striving to bring harmony, peace and beauty to the city.

After an honorable discharge from the Army Air Corps, he graduated in 1952 from the University of Southern California. Schwartz spent 36 years as a faulty member, associate dean and interim dean at Cal Poly.

Schwartz chaired the SLO Planning Commission for six of his eight years on the board.

In 1969, the voters elected him as mayor, a position he held for 10 years. Working with Cal Poly students, Schwartz convinced the city’s voters to close Monterey Street directly in front of the mission and develop Mission Plaza.

In addition to his leadership in the development of Mission Plaza, Schwartz was proud of his contributions to the city’s General Plan, Downtown Concept Plan, sign regulations, street tree planting, Capital Improvement Plan, acquisition of the Jack House and long-term water management plans. He was honored as The Chamber of Commerce Citizen of the Year in 1992.

In addition to his public service, Ken was dedicated to his family. He was a loving and generous husband to Martha, father to daughter Lorraine Riggio Schwartz and son Jan Schwartz, grandfather to five grandsons and one granddaughter, and great-grandfather to seven great-grand children. Schwartz’s wife and high school sweetheart Martha passed in 2004.