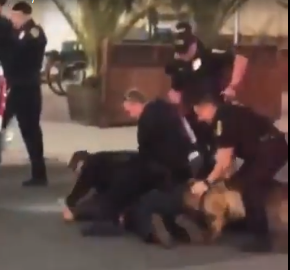 A group of Santa Maria police officers appear to rough up a suspected DUI driver after ordering him to crawl on the street, while multiple bystanders videotape the incident.

Officers stopped the suspected DUI driver on the 800 block of West Barrett Street on Sunday. The video starts with the man standing in front of a police cruiser while officers shout orders from beside the car. The suspect does not fight back and appears to have trouble understanding the officers.

An officer orders the man to “lay down,” but instead he sits down. Nearby, a woman yells at officers to talk to the suspect in Spanish. They appear to ignore her.

With the man face down on the ground, officers order him to put his hands at his side. He, again, does not comply.

An officer then fires multiple rounds of what appears to be pepper spray at the man’s face. Another officer straddles the suspect’s back and begins punching him, while a police K9 bites his leg.

The police department is looking into the incident.