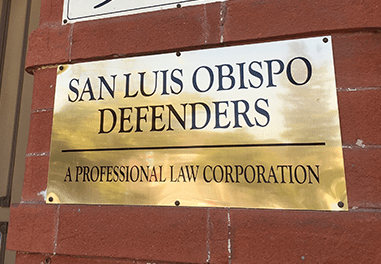 The attorney who filed a malpractice lawsuit against the law firm that provides public defender services to San Luis Obispo County is dropping the case, citing her client’s health as the reason for doing so.

Wyman spent 10 months in custody and then pleaded guilty to a misdemeanor charge of resisting a peace officer.

Canny filed the malpractice suit against San Luis Obispo Defenders, a private law firm led by attorney Patricia Ashbaugh that is under contract with the county to provide legal services to the poor. The suit named Ashbaugh, as well as Ronald Crawford, the court-appointed attorney who defended Wyman.

In September, SLO Defenders’ counsel challenged the legal grounds of Wyman’s claims in a court filing. Brian D. Peters argued in the filling that Wyman had no legal grounds to allege malpractice because he pleaded no contest to the misdemeanor charge, has not sought to have the conviction overturned and did not file an appeal within the required time frame.

California law requires a plaintiff to allege he was actually innocent of the charges for which he was convicted in order to take action against a criminal defense attorney for legal malpractice, Peters stated in the filing. Peters also argued a legal malpractice judgment must show the person was exonerated of the charges or in the process of obtaining a post-conviction dismissal of the charges.

On Monday, Canny filed a motion to dismiss the case. Canny said the case would likely have gone to appellate court and taken about two years, which would not be healthy for Wyman.

Previously, Canny said the aim of the lawsuit was to help assure defendants who cannot afford to hire an attorney get adequate representation. In addition to Wyman, Canny also represents the family of Andrew Holland, an inmate who died after being strapped in a chair for 46 hours, and several other former inmates and their families.

Wyman had been seeking an unspecified amount of damages, as well as the cost of his attorney’s fees.