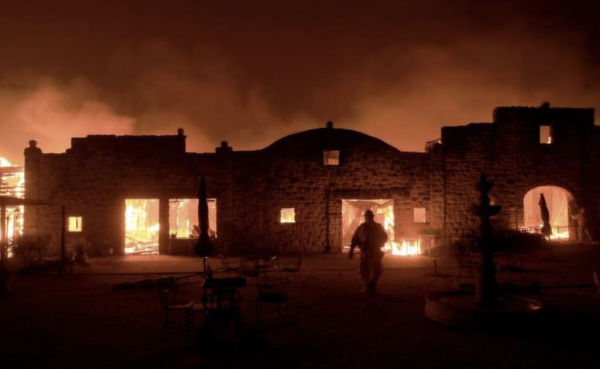 Fires are burning in numerous California counties, and PG&E is continuing to preemptively shut off power to hundreds of thousands of residents, though many customers are having their electricity restored on Wednesday.

On or around Saturday, PG&E shut off power for approximately 973,000 customers, which affected an estimated total of more than 2 million people. By Tuesday night, 73 percent of those customers had their power restored.

But on Tuesday, PG&E was expected to cut power to about 510,000 customers in sections of 22 counties. On Wednesday, PG&E said the weather was such that it could restore power to all counties except Kern County.

The utility has been citing dry, windy conditions as a reason for needing to implement outages. PG&E’s John Lindsey said peak winds on Wednesday were expected to range between 50 and 70 mph in parts of Ventura and Los Angeles counties. The winds may be felt as far north as SLO County, Lindsey said.

In Northern California, the destructive Kincade Fire has now been burning for nearly a week in Sonoma County. As of Wednesday morning, the Kincade Fire had burned 76,825 acres and was 30 percent contained. The blaze has destroyed 206 structures, damaged 40 and is threatening an additional total of more than 90,000, according to Cal Fire.

The Easy Fire, which is burning in Simi Valley, is threatening the Ronald Reagan Presidential Library, which has been evacuated. Seven thousand homes in the area are also under mandatory or voluntary evacuation orders. The Easy Fire has thus far burned 1,300 acres and is 5 percent contained.

In SLO County, a fire broke out Wednesday in Paso Robles. A structure was on fire on 28th Street near Spring Street, according to Cal Fire.

Paso Robles and Templeton firefighters, as well as Cal Fire personnel, were battling the blaze. Authorities have yet to update the status of the Paso Robles fire.