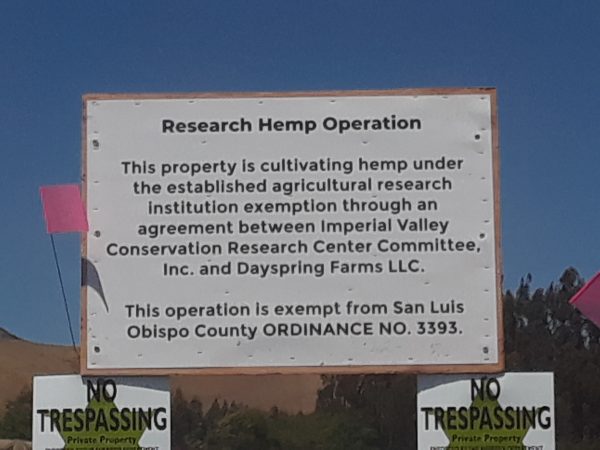 Editor’s note: This is part two in a series about a loophole in state and county hemp regulations and those taking advantage of the lack of oversight.

Both hemp and marijuana are cannabis plants. But hemp has 0.3 percent or less THC, the intoxicant in cannabis, and usually sells for about one-fourth the price. The hemp market is currently saturated and many local growers are having trouble selling their crop.

But hemp remains popular with growers who are putting acres and acres of what is labeled “research exempt” hemp in San Luis Obispo County. Both state and local government agencies failed to provide any oversight for the cultivation of hemp used for research. That left the door open for cannabis cultivators to operate unchecked as hemp growers.

In SLO County, cannabis grows operating under the hemp research exemption are not tested to make sure the plants are hemp and not marijuana, or inspected to ensure they are following local agricultural regulations.

In sharp contrast to the strict laws that regulate marijuana cultivation, the only current requirement for the nine registered local growers who report they are growing research exempt hemp is to inform the SLO County Agriculture Department of their cultivation site’s GPS coordinates.

All of the growers provided the name of the research company they claim to be affiliated with. But many of the research organizations that provide cover for hemp cultivation have credentials that are questionable.

For example, marijuana kingpin Helios Dayspring and his partner in several cannabis businesses Nicholas Andre, asked the county to exempt eight grows from testing and oversight because they had a research agreement with the Imperial Valley Conservation Research Center Committee. The two growers planned for up to 242.12 acres of hemp, according to county records.

“During the time a corporation is suspended, it loses all rights, powers and privileges to do business in California,” according to the Franchise Tax Board.

What happens to a hemp crop if the research institution the grower is working with is suspended from doing business in California? Will the grower be allowed to continue to grow and then harvest the crop, or will the crops be eradicated?

Planning Department media liaison Erika Schuetze responded to the question by saying that Marc Lea from the county agricultural department was in charge of hemp grows.

Lea said it was the county counsel’s office that was responsible for any enforcement action to be taken.

County Counsel Rita Neal did not respond to multiple emails asking her the same question.

The agreements between the hemp growers and their research institutions might have anticipated that question. But Neal’s office instructed Lea not to provide memorandums of understanding between alleged scientific research institutions and local hemp farmers. Neal said the records were exempt from disclosure because of proprietary information included in the MOUs, Lea said.

Several hemp growers and farm laborers contend that many of the research hemp farmers are actually growing marijuana and then selling the product on the black market. Lea said that could be the case because of the lack of oversight.

While claims that some public officials have promoted laws that allow political donors and affiliates to prosper, an examination of the research hemp landscape suggests that county staffers are willing to look the other way while these growers operate unchecked, and in many cases, in violation of county land use regulations.

Along the Los Osos Valley Road corridor, research hemp growers have violated multiple ordinances applicable to all agricultural businesses, including laws regarding fencing and screening, laws regarding heights and light use in hoop houses, and rules regarding agricultural development at higher elevations in the Morros Protection Area.

While some growers blame the lax regulations, others believe there is unfair enforcement based on political connections or alleged pay-to-play schemes.

From Jan. 1 through June 30, the single largest donor to Hill’s campaign was Susan Wood, who along with her businesses donated $7,000. Wood and Dayspring are partners in a North County cannabis farm listed as one of his eight research exempt hemp grows.

Part three will focus on the other exempt hemp growers and the research organizations they report an affiliation with.