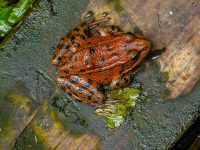 The possibility of causing harm to the endangered red-legged frog has caused the city of Morro Bay to halt breaking ground on its new sewer plant, and construction could now be delayed for a period of at least months.

Morro Bay has obtained federal funding for the project, which requires the city to be in compliance with rules pertaining to endangered species. Even though there have reportedly been no red-legged frog sightings in recent years at the sewer project site, the United States Fish and Wildlife Service is now reviewing the project’s potential impacts on the frog species.

Morro Bay officials argue there has not been a red-legged frog sighting within a square mile of the project site since 1996. The federal Environmental Protection Agency has stated the sewer project “may affect, but is not likely to adversely impact” the red-legged frog and its habitat.

In response to the probe into potential impacts on red-legged frogs, City Manager Scott Collins told the New Times he expects the project to be delayed by several weeks to several months.

Morro Bay’s new approximately $125 million sewer plant is supposed to be constructed on a 27-acre South Bay Boulevard property near the watershed of the Morro Bay Estuary. Construction had been scheduled to begin this year, and the project was scheduled to be completed by 2022.

In addition to the delay over the red-legged frog, the project is being contested by a citizens’ group that has won the right for voters to have their say on the new sewer plant via a referendum.