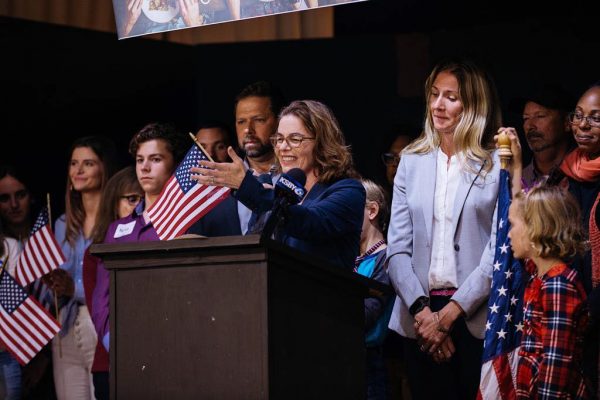 Less than two years into her first term on the Morro Bay City Council, councilwoman and Women’s March SLO leader Dawn Addis has announced she is running for a seat in the California State Assembly.

Addis, a Democrat and SLO County Progressive, is challenging incumbent Republican Assemblyman Jordan Cunningham for the 35th District seat. The district includes all of San Luis Obispo County, as well as much of northern Santa Barbara County.

On Thursday, Addis announced her campaign at a SLO County Progressives meeting. The gathering also featured SLO County Supervisor Adam Hill, whom Addis endorsed in his bid to keep his seat on the board of supervisors.

“My record is proven,” Addis said in her campaign announcement. “I’m ready to bring my passion and skills and my action to Sacramento.”

The Assembly candidate did not elaborate on her platform or explain policies for which she would advocate in the Legislature. Addis’s campaign website states she has advocated for increased housing, clean water, security, improved infrastructure, local jobs and economic development.

As a member of the Morro Bay council, Addis was the target of an angry constituent who sent her vulgar emails. Addis spoke out about the matter and Morro Bay police recommended charges against the man.

Addis has also had involvement in controversy surrounding the development of SLO County’s legal marijuana industry.

While a city council candidate, Addis was one of eight local politicians for whom marijuana mogul Helios Dayspring hosted a fundraiser.

Initially, Addis failed to report the fundraiser as required by law. However, after Cal Coast Times reported on the secretive event, Addis amended her financial discloure form to include Dayspring’s fundraiser.

Dayspring was then awarded marijuana dispensary permits by the cities of Morro Bay, SLO and Grover Beach, which each have council members whom the marijuana businessman supported.

Cunningham, who is running for a third term in Sacramento, was first elected to the Assembly in 2016 and then reelected in 2018. In the latter year, Cunningham defeated Democratic challenger William Ostrander 55.9 percent to 44.1 percent.

The primary election will take place March 3, 2020, followed by the general election on Nov. 3.