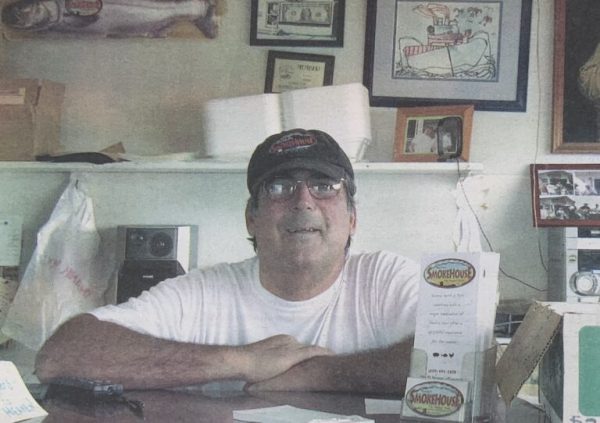 Smoker Jim Ruddell is no longer with us, but his smokehouse just off the seawall and the south lot is, a testimony to his creativity and passion to produce something unique and authentic and, lastly irresistible to the public. Jim’s big old van advertising his business is now driven by his wife Cathy, who has run the business since Jim’s death from cancer, a time during which Jim kept smiling and laughing and never complained.

Jim was a large personality in Cayucos, somebody who had time for anybody no matter who they were, and when he first opened his little hut (a quarter of the size of a millionaire’s clothes closet) around 20 years ago, he smoked pork and beef ribs and gave them away to a bunch of us salivating locals who hung out by his smokehouse, tantalized by the aromas.

We all stood around the seawall or sat in his chairs with our one big meaty rib and scarfed them like hungry dogs, a sight Jim enjoyed almost as much as he did sitting in the Spencer’s Market parking lot in his van, devouring their fried chicken and listening to golden oldies on his radio.

“How’s that chicken, Jim?” I’d ask, heading toward my car with a bag of groceries.

Jim would break out laughing, a drumstick or thigh or wing in hand, face greasy. “Great!”

That was Jim, a simple pleasure making his day, a man with big appetites who loved to eat and once drank too much booze to the point of self-destruction and kicked it; a man who overcame the odds to open a smokehouse—an obsolete business model–and made it thrive.

At one time, almost every beach town with a pier had an accompanying smokehouse that produced smoked albacore and salmon and oysters or whatever was fresh and caught that day. These little ramshackle wooden or corrugated huts held smokers inside.

Jim learned the rudiments of smoking as well as seasonings from his father and uncles who were from Louisiana. When he was living and working as a garage manager for Toyota in Southern California, he yearned to escape the rat race and move north to a small beach town and start his own smokehouse. After finding himself amid the riots and in grave danger while driving the freeway during the Rodney King race riots in Los Angeles in 1992, he pulled up stakes and left.

At first, he worked for Toyota in San Luis Obispo, taking a 50 percent pay reduction. But all the while he was determined to start smoking, and eventually turned an old pizza oven into a smoker, which he kept in the backyard of his home in Morro Bay.

He began smoking turkeys for a few friends. The results were excellent. So he built a smoker in a pole barn on a friend’s ranch in Cayucos. And he got into some serious smoking.

He had an old pickup. Without a business license, he found little spots along highways all over the county, from Highway 1 to Nacimiento Road out by Chimney Rock to Old Creek Road, and laid out his sign: “SMOKED FISH.”

He hung out on Highway 1 a mile north of Cayucos for almost a year. The cops hassled him about a license and he moved on. He had quit his job but he went back and still spent weekends on the side of the roads, selling his smoked fish.

People felt Jim was crazy when he gave up his job for good and decided to go all out, but he had come too far to give up his dream. When Adam Pollard moved his tiny original operation of Taco Temple to a bigger venue in 2000, Jim jumped into the tiny corner space behind the liquor store and put up his bathtub-sized smoker and went to work.

He thrived. Dollar-wise and penny-foolish, he treated us locals to freebies. He played his own music throughout the day. He put out tables and chairs.

On weekends he even hired local bands. The atmosphere was festive, and orchestrating it all was Jim Ruddell. His product was so luscious it was written up in the New York Times, which is possibly why so many east coast tourists came down from the Big Sur to hit Ruddell’s Smokehouse, which became a Cayucos destination.

He began shipping products all over the country, as far east as Washington D.C. All summer, his tables were filled and lines waited outside the tiny mecca for his tacos.

Today, Ruddell’s Smokehouse is a landmark, a throwback to an era when weathered men and women in aprons and salt-and-sweat-stand ball caps gathered fresh fish right off the local piers from commercial fishermen and smoked them to perfection; a vanishing breed whom Jim described as like a “circle of crusty old women with recipes everybody wants, but who won’t give up nothin’.”

Jim liked the idea of planting his smokehouse in Cayucos, a last outpost of sorts, still steeped in the 1950s, a time before little beach burgs full of surfers and pier fishermen became prime real estate for millionaires whose demand for their trappings changed the funkiness of beach living forever. Jim’s smokehouse stands as a reminder of an era long gone, and a monument in the warding off of the radical gentrification of Cayucos now taking place.

And his crew, young men in black smokehouse T-shirts, have become fixtures along the seawall after the business closes at 6 in the evening as they chug a few beers, lag quarters and kibitz with locals like Happily Homeless Dave and Patrick and Penny and a few stray mutts, as the sun sinks behind the northern cape of Estero Bay.

Smoker Jim would love that.