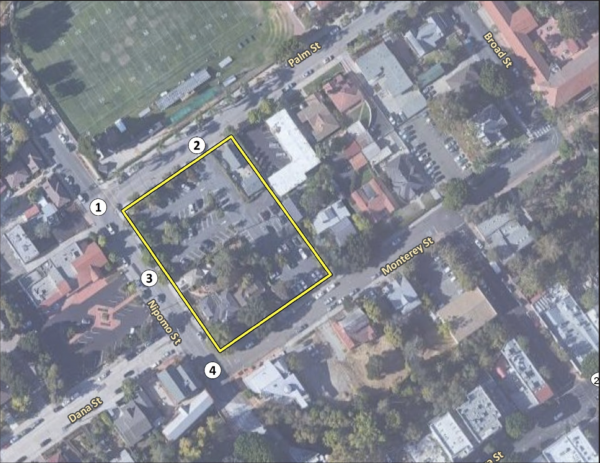 The San Luis Obispo City Council approved a project on Tuesday night that will bring a large parking garage and theater to a downtown SLO corner. [Tribune]

More than 15 years after declaring it a major city goal to construct a parking structure at the location, the council approved a garage to be built at the corner of Palm and Nipomo streets. As part of the same project, a new San Luis Obispo Repertory Theatre building will also be constructed at the site.

On a 3-0 vote, with two council members recusing themselves, the council approved a 50-foot-tall, 404-space parking structure. Council members Aaron Gomez and Andy Pease recused themselves from the vote because their businesses are located within 500 feet of the project.

Plans call for 24-hour parking with up to about 140 spaces, or 31 percent of the garage, allotted for electric vehicle charging. There will also be public amenities space on the top floor with views of neighboring hills, as well as locations in the city.

Owners of neighboring businesses had argued the new structure is badly needed to reduce congestion.

The new theater is expected to be an approximately 23,000 square foot building. San Luis Obispo Repertory Theatre is operated by a nonprofit, and construction of its new building will be funded separately from the city-operated parking structure.

Plans call for the new theater to consist of two performing areas. One area would have 193 seats, including a 49-seat balcony, while the other would contain a separate wing of 99 bleacher-style seats capable of collapsing for experimental stage options.

The new building could result in SLO Repertory Theatre’s attendance rising from 18,000 to 50,000 people a year. It will also allow for two shows to take place at once.

A landmark home, the Heyd Adobe, currently occupies the site. The council voted to give City Manager Derek Johnson the discretion to allocate up to $100,000 in city funds to assist a private investor or group in covering the estimated $1 million cost of relocating the historic home.