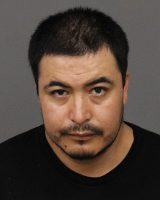 San Luis Obispo police caught a man Tuesday night who had allegedly been peeping at women as they prepared for bed.

Recently, police detectives had been investigating reports of prowling in and around the 800 block of Boysen Avenue. Detectives identified Juan Francisco Rodriguez Espino, 35, as a suspect after recovering evidence from an incident that occurred on Nov. 17, police said.

Over the following 10 days, detectives obtained additional evidence linking Espino to a total of four prowling incidents dating back to Oct. 2018. Each of the incidents occurred in or around the 800 block of Boysen Avenue.

At about 11:40 p.m. Tuesday, detectives were conducting surveillance in the 900 block of Boysen Avenue in response to reported prowling in the area. Detectives followed Espino, whom they found hiding in bushes behind a closed office and near a window.

Police say it is unclear what Espino’s motives during Tuesday night’s incident.

However, Espino is believed to have targeted women preparing for bed during previous prowling incidents. Investigators believe Espino had a sexual motivation for doing so.

Officers transported Espino to the San Luis Obispo Police Department, where he was interviewed before being booked into the SLO County Jail on prowling charges.