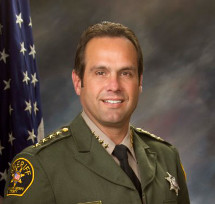 The president of the San Luis Obispo County Deputy Sheriff’s Association filed a petition asking the court to review his demotion for excessive force at the jail, which he says was politically motivated. During the last election, the union did not endorse Sheriff Ian Parkinson. [Tribune]

In his petition filed Friday with the San Luis Obispo County Superior Court, Lars Luther asks the court to set aside his Feb. 2019 demotion, and to order the department give him back-pay and interest. Luther has worked for the county since July 1990.

In Oct 2018, Luther participated in the physical restraining of an inmate held in the medical isolation unit. The inmate was not injured and did not allege the deputy used excessive force, according to the lawsuit.
Days later, an unidentified department source filed a formal complaint.

Several years ago, the court ruled a Grover Beach police officer who served as the union president, had been wrongly terminated. The officer was given his job back, back pay, and interest.

While this is the first allegation of excessive force lodged against Luther, in 2015 he allegedly made gender-based’ discourteous remarks directed at fellow employees. He was also reprimanded for cursing at a female lieutenant in 2016, and in 2018, for making inappropriate remarks to a sheriff’s assistant.