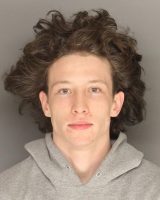 At about 4 p.m. on Nov. 18, three suspects robbed two victims at gunpoint inside their Isla Vista home. Two of the robbers were carrying handguns, according to deputies.

The suspects stole two laptops, a cellphone, a wallet and an unknown amount of marijuana. One of the victims suffered minor injuries, while the other victim was uninjured.

Over the course of the investigation, detectives identified the two suspects who held the victims at gunpoint and tracked them to San Francisco. Sheriff’s officials authored arrest warrants and three search warrants, which were served in San Francisco on Friday.

Officers served the warrants at the suspects’ homes, as well as at the home of the registered owner of the getaway vehicle. The owner of the vehicle was not arrested.

Investigators recovered several items related to the robbery during the searches.

Deputies arrested 18-year-old Gavin Rapin, of San Francisco, on charges of robbery, residential burglary, false imprisonment, kidnapping for the purpose of robbery and conspiracy to commit a crime. Rapin was booked into the Santa Barbara County Jail.

The second suspect deputies arrested is a juvenile whose identity is being withheld. The juvenile is charged with robbery, residential burglary, false imprisonment, criminal threats and conspiracy to commit a crime. Deputies booked the underage suspect into Santa Maria Juvenile Hall.