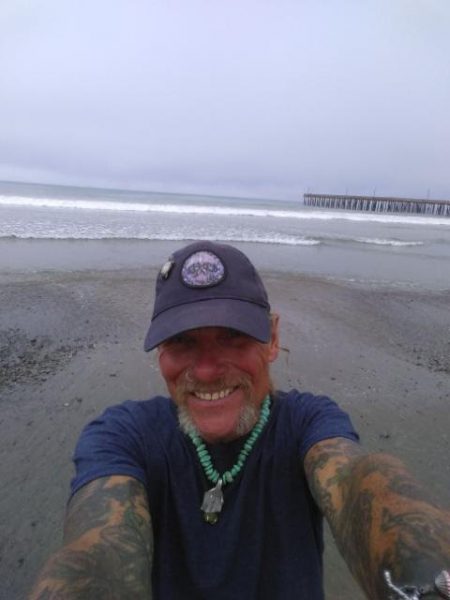 Happily Homeless Dave, about whom I’ve previously written in this venue, received a citation for an “open container” from the police the other evening.

It is well-known among the boys and gals who hang out along the seawall and in the south lot late afternoons and early evenings that a local element of precious pious locals, terrified Dave will spoil the image of squeaky clean high-end Cayucos and lower the value of their homes just by being a presence, want him extracted from town and sent on his way.

These prickly souls have repeated a mantra of dire fear that their children “might observe Dave and somehow be corrupted” just by the sight of an artisan almost always hard at work with his sculptures, or else leaving his tiny moving quarters unattended while he works as a carpenter.

We don’t know who these people are but we can guess. They are the kind of people who avoid or skitter past the congregation of beer drinkers who usually populate the south lot late afternoons or early evenings–mostly surfers or homies or drifters new to town; and these drifters make a huge effort to be invisible and friendly, are no threat to anybody, are merely trying to survive in a society more and more difficult to survive in.

Of course, history will tell us that the powers that be, urged by the holier-than-thous, always use the local police force to sanitize their little isles of fantasy, where the ghastliness of homelessness and shiftlessness ruins their fantasies and sets them on their warpaths.

Do these locals realize Homeless Dave is a devout, non-hypocritical Christian who regularly goes to church in town and has been helped by its members? That he is a member of the local art association and sells his sculptures in their gallery? That he is self-sufficient and wouldn’t dare ask for a handout; and has gone out of his way to help those homeless people hanging out in town, because he understands what it feels like to be down and out and scorned upon?

But this business with Dave is just a small example of a symptom in all communities, and especially radically gentrified beach communities, where basically they become gated communities without gates.

I left Manhattan Beach in 1986 because the days of a bunch of us “hardcore beach people” could not only not afford to live there anymore, but new laws were being contrived by local politicians—spurred by the onslaught of millionaires—which disallowed just about every one of our freedoms.

I recall driving down there about 15 years later to play basketball at a park complex where I’d held court for 17 years. I was early, and briefly tossed a tennis ball in the adjoining grassy park to my black Lab, who’d been cooped up in my rust-bucket twenty-year old Toyota Tercel for four plus hours. Just as I was finished and headed to my vehicle, a squad car pulled up, lights swirling. A group of women in the play area beside the tennis courts stood to watch the proceedings.

As I stashed my dog in the car, two officers approached me, asked for my driver’s license, insurance, and registration. There had been a complaint of my allowing a dog in the park, which was prohibited. They pointed to a nearby sign on which was written a large number of possible endeavors prohibited in town.

I apologized when I spotted another squad car pull up and an officer quickly jumped out as, possibly, back up.

I informed them I had lived here for 17 years, but hadn’t been back in a decade and was unaware of these strict new laws. I added that if I had known about the new laws, I would never have allowed my dog in the park and affronted the women in the child’s play area.

They looked me over pretty well in my raggedy hoop attire, and decided to take my license to the squad car and run a make on me. They were shocked when I came out clean, the disappointment on their faces obvious. They warned me sternly to never allow my dog in the park again, pointed me toward a dog path, and wished me a good day. I thanked them for their understanding and leniency, realizing I had blossomed into a blatant undesirable in this part of the world.

******
It will be harder to carry out this kind of tyranny in Cayucos, because we do not have a local police force to enforce the kind of strict laws that go on in a place like Manhattan Beach, where I once rented for $120 a month but now has a median home value of two and a half million.

The crew who drink beer in the south lot best beware, though, and perhaps place a lookout with phone on the corner of D Street and Ocean Avenue to warn the boys to hide their beers when the law lurks around desperate for open containers, anxious to please their pious rat-finks. They’ll be able to spot them coming down the alley along the seawall, so they’d better be on the alert.

These dudes in the south lot are really dangerous people. They play their music, stand around or sit on tail gates and toss balls to their hounds. They laugh a lot and fist bump and high five. A couple of them live in their vans yet are locally employed.

They are friendly to most anybody who walks by. Some of them surf. They are not especially loud, and I’ve never seen any of them gruesomely drunk, only high and happy, a real vicious threat to those rich snobs terrified of their image being spoiled and their children tainted by the sight of a few rascals, utterly harmless, savoring a jocular comradeship that has survived in beach towns for well over a century.

The fantasy of purity must be upheld at all costs!

And Happily Homeless Dave, who works his ass off trying to make enough money to afford his own place, gets to pay a hefty fine. Happy?

While the holier than thou sit back in their mini mansions and sip their precious wine while their kids play computer games.