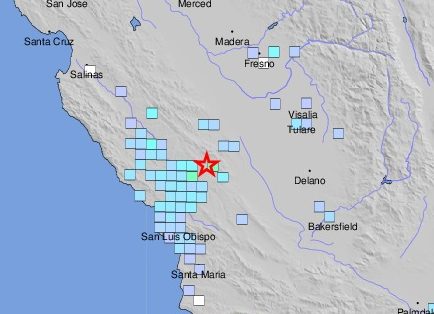 A 4.3-magnitude earthquake struck near the Cholame Y Tuesday morning, resulting in shaking being felt in much of San Luis Obispo County.

The quake, which occurred at 10:29 a.m., was centered in southeastern Monterey County just north of the San Luis Obispo County line, according to the United States Geological Survey.  Its epicenter was along Cholame Road between Cholame and Parkfield. The location is about 6.8 miles northwest of Cholame and 11 miles north of Shandon.

Residents most reported shaking in North SLO County. But, the quake was felt in several counties, including Monterey, Kern and Santa Barbara, according to a USGS map.

The earthquake had a depth of approximately 3.9 miles. There have been no reports of injuries or damage to property.