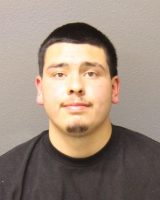 Shortly after botching a robbery attempt, an 18-year-old man with a loaded handgun attempted to evade officers by running onto the Santa Maria High School campus Tuesday afternoon.

On Tuesday afternoon, JacobAceves approached a male juvenile, physically restrained him and demanded money, according to the Santa Maria Police Department. The juvenile managed to break free and run for help.

Then at about 4:44 p.m., officers found a man with a handgun in the area of Morrison Avenue and Thornburg Street. The man, later identified as Aceves, and another individual immediately ran onto the Santa Maria High School campus.

At the time, there were several students on campus participating in various after-school activities.

Officers set up a perimeter around the campus. One officer then encountered Aceves at the south end of the high school.

While officers detained Aceves, a school staffer led police to a location where he saw the teen discard something next to a classroom. There, officers found a loaded handgun.

One investigating officer noticed Aceves matched the description of the suspect in the attempted robbery that occurred earlier in the afternoon.

Officers arrested Aceves for attempted robbery and various weapons violations, including possession of a loaded firearm on a school campus. Police booked Aceves into the Santa Barbara County Jail with his bail set at $50,000.