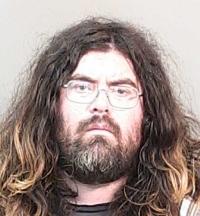 A San Luis Obispo sex offender, who was recently caught peering into Grover Beach homes, has been arrested for the second time in less than a week, prompting some criticism of local law enforcement.

Richard Eugene Parson, 43, was arrested on Wednesday night in San Luis Obispo on a charge of felony failure to notify of a change in address. California criminal code requires sex offenders to notify the last agency with which they registered within five working days of moving to a new location.

In 2002, Parson was convicted of committing lewd or lascivious acts with a child under the age of 14, according to the Megan’s Law database. He was released from custody later that year.

Last week, Parson was arrested on the morning of Dec. 13 in Grover Beach.

Shortly before 7 a.m., a resident spotted a man prowling in his neighbor’s yard and called 911. Grover Beach officers then caught Parson and arrested him.

Surveillance footage from several homes showed Parson prowling and peering into residences through windows, according to the Grover Beach Police Department.

Officers booked Parson in jail on two counts of prowling and one charge of providing a false identity to an officer. Shortly afterwards, Parson posted bail and was released from custody.

KSBY reports, on Wednesday night, a citizen noticed Parson inside a San Luis Obispo Starbucks, and recognizing the sex offender from a Most Wanted Wednesday segment that appeared in the news. The citizen reported Parson to police.

San Luis Obispo police then arrested Parson and booked him into the SLO County Jail. As of Friday morning, Parson remains in custody with his bail set at $50,000.

The county sheriff’s office said it was not able to check the status of Parson’s sex offender registration until he had already been released from jail last week. A felony warrant for Parson’s arrest was then issued.

Local defense attorney Ilan Funke-Bilu, who is not representing Parson, criticized Grover Beach police for their handling of the case.

Funke-Bilu said he would think the arresting officer would be conscientious enough to check something obvious like the status of a sex offender’s registration when the individual gets arrested for an offense like peeping. But, people make mistakes, Funke-Bilu said.