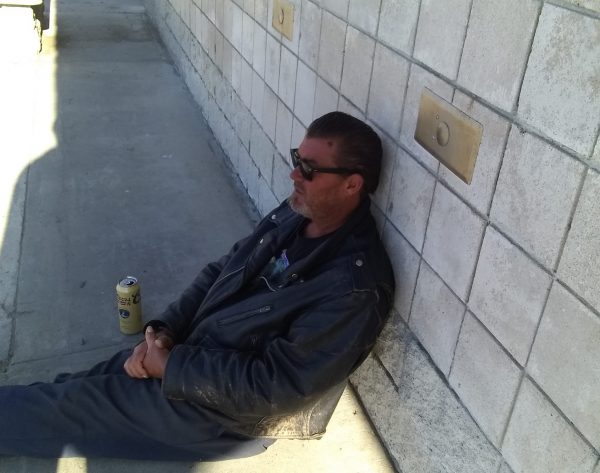 The holier-than-thou crusaders of Cayucos, who recently saw fit to tear off the empty beer cans decorating the little nondescript fir tree in front of the south lot, must understand that so-called ne’er-do-wells are sensitive people. I know this because, as a person long suspected of being a ne’er-do-well, and at times admittedly existing as a full-fledged ne’er do well, I become slightly incensed when being accused of being a ne’er-do-well.

Now, about the boys who hang around the South Lot late afternoons and evenings, who have also been accused of being ne’er-do-wells by the holier-than-thou crusaders of Cayucos: They are not really ne’er-do-wells, though a man named Patrick, who might or might not be the only unemployed person of this crew, could argue that he lives quite joyously under the moniker of ne’er-do-well, because, well, Patrick seems joyous most of the time. Though when he did discover that the holier-than- thou crusaders ripped his prize beer cans off his carefully decorated, dwarf-sized, raggedy fir tree, he was aroused, and more than miffed.

Patrick and the boys, who took tremendous pride in their creativity as they attached one empty half quart beer can after another in purposely haphazard fashion on said tree, meant only to celebrate the
Christmas spirit in Cayucos in the best way they knew how.

They had no idea they were outraging the holier-than-thou crusaders of Cayucos, and provoking them into furtively skulking around in the darkness, long after the ne’er-do-wells scattered to their vans and hovels, and destroyed their little contribution to the lights and ornaments popping up all over Christmas crazy Cayucos–a time when the holiest of the holier-than-thou crusading Cayucans feel an obsessive ownership of Cayucos and are most vulnerable to hate the ne’er-do-wells lurking so nearby, where they seem to be having a great time drinking beer, laughing and tossing balls to their dogs, high-fiving, hugging, and, of course, attaching empty beer cans to their beloved yet pathetic little tree.

What the holier-than-thou crusaders must understand is that these people are not ne’er-do-wells. A couple of them own their own businesses. Even the ones living in their vans are employed. None of them have ever been seen half as drunk as those exiting the Tavern or Schooner’s Wharf or any of the restaurants in town where wine and hard liquor is consumed with piquant dishes.

Basically, these are just a bunch of guys who aren’t particularly ambitious, yet, at the same time, they partake in enough of the work ethic to survive and possibly enjoy a little comradeship, a kind of looking forward to spending valued time with buddies.

“Why the fuck would they want to do this?” Patrick asked, pacing, clearly agitated after discovering the barren little fir tree. “Well, the holier-than-thou crusaders’ kids might see this tree after observing the big beauty across the street, and be scarred for life by the sight of it,” I tried to explain.

Another lanky blond kid, gainfully employed, surfboard atop his SUV, said, “Assholes. That tree wasn’t bothering anybody. It was a fun tree. It was our tree.”

“Well, this is fantasyland,” I said. “Especially this time of year. Perhaps the little tree was taken as a sort of anti-Christ image. The children would certainly be scarred by that.”

As I stared sadly at the now barren little fir tree, and learned that Happily Homeless Dave wasn’t the only person to receive an “open container” citation from the police these last few evenings, I thought of asking Patrick to lead a charge in re-decorating the tree, since one little session of beer drinking could possibly fill the tree with joyous empty beer cans.

But then I thought, the holier-than-thou crusaders would probably have sentries patrolling the lot into the wee hours, ask the sheriff’s department for extra officers in this emergency of sacrilege, and might even collect a band of their sanctimonious ilk and tear the poor sad tree from its roots so that, never again, can the so-called ne’er-do-wells of slumberous, serene Cayucos decorate their little tree.