An SUV missed a turn on Highway 1 in San Mateo County on Monday, plunged off a cliff and then disappeared along with its driver. [Mercury News]

Dash cam footage shows the SUV missing the turn and driving off the cliff. Authorities have thus far been unable to locate the vehicle and its driver, which appear to have plunged into the water below the cliff.

It is also unclear whether there were any other occupants in the vehicle.

The northbound vehicle drove off a cliff near Gray Whale Cove State Beach. The United States Coast Guard said the vehicle, a green Lexus SUV, was speeding along the shoulder of Highway 1 prior to driving off the cliff without appearing to slow down.

In the dash cam footage, the SUV is momentarily seen airborne before it disappears from the frame.

The southbound driver whose dash cam recorded the video said the SUV flew off the cliff at about 11 a.m. There does not appear to be any other witness to the SUV driving off the cliff.

Rescue personnel searched for the vehicle and driver in water up to 40 feet near the base of the cliff, but failed to locate either the SUV or the person.

Search crews found tire tracks on the cliff. They also found vehicle parts in the water, but it is unclear if they belonged to the SUV.

Dangerous conditions have at times forced to officials to halt the search. An investigation into the cause of the crash is also ongoing. 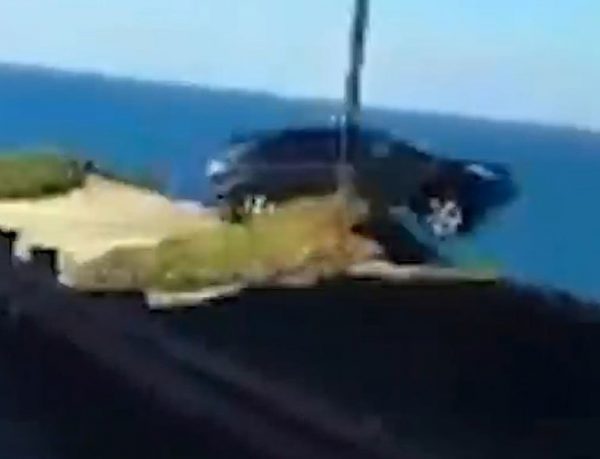