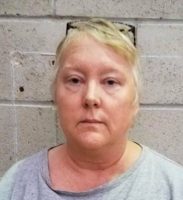 The longtime vice president of a Central Valley agriculture company was arrested at her vacation home in Morro Bay on Tuesday for allegedly embezzling more than $300,000.

Denise Franks allegedly embezzled the money over the last four years from Best Agri Marketing, a dairy products merchandising and marketing business located along Highway 99 in the Tulare County town of Traver. Franks had reportedly served as vice president of the company for 19 years.

Following the investigation, on Tuesday, the Tulare County Sheriff’s Ag Unit served a search warrant at Franks’ home. Investigators then determined Franks was at her vacation home in Morro Bay.

Morro Bay police detained Franks at the vacation home, and Tulare detectives traveled to the San Luis Obispo County city to arrest her for embezzlement, grand theft and identity theft and booked her in custody in Tulare County with her bail set at $75,000.