A homeless man who is said to be romantically interested in San Luis Obispo Mayor Heidi Harmon burst into City Hall on Monday in attempt to meet with her, then physically confronted City Manager Derek Johnson, who ended up pinning the man to the ground and waiting for police to arrest him.

Harmon and Johnson have responded to the incident with statements about government workers being faced with threats and violence. The mayor, in particular, alleges sexism factored into Monday’s incident.

At about 11 a.m., Lannen Bowers, 58, entered the joint office for city council members, the city clerk and city manager. Bowers asked to meet with Harmon.

When an administrative assistant informed him Harmon was not in her office at the time, Bowers became hostile and threatening, creating commotion and fear in the city office, Johnson said in a statement published on the city website. Bowers then jumped over a short wall separating the reception area from public workspace, surveillance footage of the incident shows. 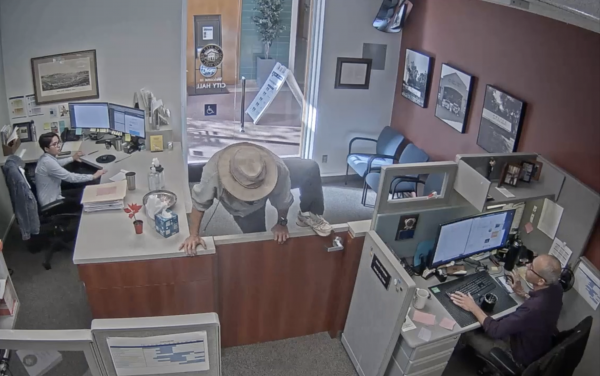 Johnson then blocked Bowers’ path. Bowers appears to charge into Johnson before both men disappear from the frame of the surveillance video. 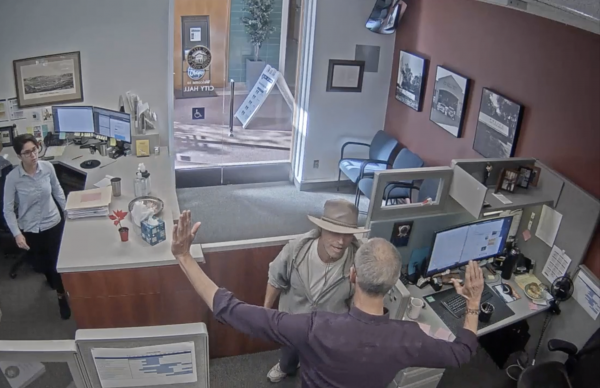 Upon reappearing in the footage, Johnson is seen grabbing Bowers’ arms and taking the man down to the ground outside a City Hall bathroom and near the entrance to the council chambers. Johnson then held down Bowers, who was lying on the ground, for several minutes prior to police officers arriving.

Officers took Bowers into custody without further incident and arrested him. No one suffered injuries during the incident, Johnson said in his statement.

Prior to the incident, Bowers repeatedly tried to contact Harmon, reportedly leaving notes for her. Bowers’ prior behavior and communication with Harmon, although concerning, were not viewed as illegal by police or the city manager.

Also shortly before the incident, Harmon stated in a Facebook post that she faces constant threats as a result of her job as mayor.

“The amount of cruelty, rudeness, threats, sexism, stalking, body shaming, rude/threatening comments toward my children, etc. I receive are unbelievable,” Harmon stated in the Facebook post. “And it is not my job to be sacrificed at the altar of “incivility” which is WAY too small a word. It’s no wonder we don’t get very many good people to run for office when we can expect to be treated this way literally EVERY SINGLE DAY.”

“Certain people in government are more vulnerable, such as those who work in the offices of city leaders, employees whose jobs put them in direct contact with members of the public, and elected officials,” Johnson said in the statement. “Unfortunately, female elected officials face an increased risk.”

After completing its investigation, San Luis Obispo police will forward the case to the SLO County District Attorney’s Office. Bowers is not currently in custody, according to the county sheriff’s office website.