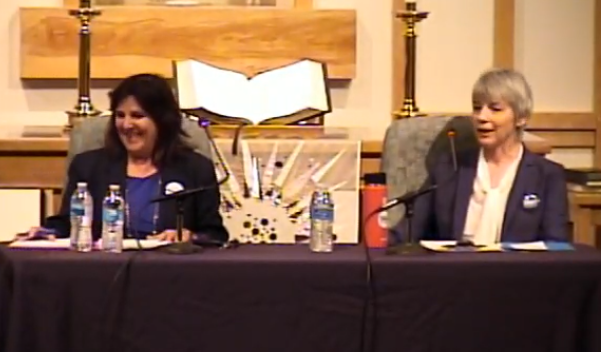 Candidates for the San Luis Obispo County Board of Supervisors District 5 seat bantered over their views on housing and the local economy at an Atascadero Chamber of Commerce forum on Thursday. Incumbent Supervisor Debbie Arnold and her challenger Ellen Beraud  debated each other for the first time.

While regularly failing to provide specific policy plans in her responses, Beraud took multiple jabs at Arnold for her votes on water sustainability and road work. Arnold fired back voicing her views on the importance of keeping up infrastructure and supporting the almost 80 percent of the public who voted against a private water district to manage the Paso Robles water basin.

How do you plan to address the lack of affordable housing?

Arnold noted that she has been a strong proponent of housing, but that the increased costs of regulations and the lack of new construction have led to a housing shortage. In order to make it easier for people to own their own homes, she supports the construction of more starter and workforce housing.

Beraud blamed Arnold for not having more residential projects in the pipeline. She said affordability in the county is tied to having a strong workforce.

Beraud also said she was opened-minded to creative solutions from nonprofits. In lockstep with supervisors Adam Hill and Bruce Gibson, Beraud suggested working through nonprofits to generate the construction of more apartments.

How do you address the county having a median income below the state average while the county has the sixth highest cost of living in the United States?

Beraud suggested increasing goverment employee salaries in a system that considers what other cities are paying when determining raises as a way to balance the discrepancy between income and housing costs, saying, “We can pay more.” She condemned Arnold’s vote to limit staff pay increases in 2019; the employee union was seeking a 3 percent raise for the 2018/2019 fiscal year.

“Those employees put their heart and soul into serving our community, and they deserve a living wage,” Beraud said.

Arnold, an opponent of the competitive salary model, disagreed. She opposes raising wages much above the cost of living while the county struggles with pension debt.

“We do the best we can to pay fair wages,” Arnold said. “It’s easy to say raise goverment salaries, but it is all about balance.”

What would you do to help our business community thrive?

Beraud noted the importance of having a level playing field. She chastised Arnold for opposing a proposed private water district in the North County saying, “We can’t take water for granted.” Beraud supports options other than water cutbacks, which she said “is not an acceptable solution” to bring the aquifer back to sustainability.

Beraud then spoke of the importance of reliable internet to support small businesses. She suggested creating hot spots where people get free internet.

Arnold suggested supporting organizations that promote economic growth, such as the Atascadero Chamber of Commerce, as it works to create work spaces for young entrepreneurs.

In response to Beraud’s support of a private water district, Arnold reminded attendees that almost 80 percent of voters opposed that plan.

Should the board entertain a moratorium on rental increases, and should supervisors restrict vacation rentals to help battle the high cost of rental housing?

Arnold opposed rent control, saying it it does not result in lower prices. Instead, fewer people get into the rental business and rental costs go up. As a supervisor, Arnold has approved some restrictions on short-term rentals, but finds that it is a balancing act.

Beraud approved of issuing “guidelines” on rental increases. While aware of the controversy, she did not have policy suggestions regarding short-term rentals.