I ran into a man the other morning who told me he had five kids. This was in front of the Honey Girl Cafe on Ocean Avenue on Cayucos.

The guy with five kids was standing beside one of the umbrella-topped tables on the sidewalk, and glanced at me as I approached with my dog Wilbur.

“You’re the guy writing for CalCoastNews about Cayucos,” he pointed out, smiling.

He was in shorts and a T-shirt, which to me is the most appropriate attire for living in Cayucos. My guess is, he put two and two together and figured I was the guy by recognizing Wilbur, who I frequently include in my articles and who has been pictured in some of them, and whose behavior has gotten me into volatile confrontations.

I thanked him. I was a little disappointed. I was hoping he hated my pieces and wanted to pick a verbal spat. These days, a good but harmless fight is about all I have left to stuff into the meaninglessness of my paltry existence. But I was relieved when he commented that he disagreed “a bit” with one of my pieces. This reaffirmed my suspicion that he was an honest person with substance.

He immediately drew a line in the sand: “I like your writing, but I don’t always agree with you.”

This kind of response led me to want to continue to talk to this sprightly individual of about 45, and we did. He is one of these people with a natural gusto for life. He appeared upbeat and happy, not cynical, though he agreed with me that Cayucos was being radically gentrified and he did not like it.

When I brought up my proclamation that most streets in Cayucos were ghostly, with empty castles, he agreed but added that his street was the exception, and was occupied by permanent residents in eleven of twelves houses. He described his house as having a sort of garish paint job that stood out, but that it was also large enough for his five kids. 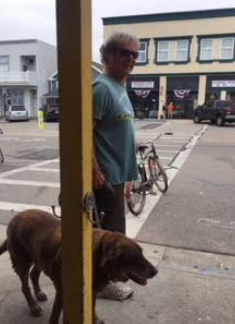 While old Wilbur sat down, we talked about how long we’d lived here. He’d been here around 20 years.

He was a contractor, but not a flipper of homes or a cold blooded real estate maven; he built retirement residences. He didn’t want to talk about himself, though. He was not a person who wanted to talk about what he did for a living or what he liked and disliked.

As I studied him, I thought to myself, he has five kids! Who the hell wants to have five kids in this world of tightening finances? In this lunatic world of rapidly declining quality of life?

But then I thought, he mentioned that he had five kids, which made me believe this was what he was about—fatherhood. A guy who is about his kids, dedicated to his kids, very possibly has a wife who thrives on raising kids, and of course puts them first above all. To an old bachelor like me, who likes kids but has never wanted any, this was stunning. Unimaginable, and frightening.

When our conversation was over, and we shook hands and I walked off, I couldn’t stop thinking about this vibrant, friendly, borderline joyous guy and his five kids. My mother came from a dirt poor, Great Depression era family of seven kids. I grew up in Compton where there were many big rag-tag rough-house families, most of them teeming with tensions, but they all seemed fairly well-adjusted for having to fight over attention and goodies provided.

I have a lot of cousins. Big families. But today, in tiny Cayucos, a big family of five?

Well, the other afternoon, because the tide was in, and I couldn’t walk Wilbur on the beach, I was strolling down Ocean Avenue when I spotted this phalanx of joggers and bicyclists headed toward me along the bike path.

They were all decked out in shorts and T-shirts and proper jogging shoes.

As they approached, all of them sweating and straining, I noticed my new friend Chris leading the way. I wasn’t sure it was him at first, until he waved and exclaimed to his family, “There’s Dell, the Cayucos writer!”

His wife, halfway back in the pack, pushing on, smiled and waved. The kids yelled out enthusiastic greetings, allowing themselves to wave through their strenuous exertions. I was too flummoxed to immediately react and only managed a nod and belated wave as they passed me, headed down the avenue, a family of five kids (or was it more?) and husband and wife jogging together.

I thought to myself, “Chris is making sure his family appreciates health through exercise. He knows this will lower visits to doctors and that his children will be like him—energized and in shape and in communion with his surroundings.”

That they all issued greetings infused me with reassurance that the race has hope, even that Cayucos has hope.

I’m sure Chris and his wife make sure their five kids eat a good diet and don’t watch much TV, or are bogged down with video games, or are constantly walking around gazing down at their Smart phones while all of life swirls around them.

I’m sure Chris and his wife have taught their children not to waste precious energy and food or spew garbage or overload on sweets, that they’re encouraged to share and appreciate how good they have it compared to others, and exemplify what’s right and wrong and commonly decent and humane through their own behavior and treatment of others, and possibly not through dogma or doctrine, and that these kids will follow suit.

There’s a lot one can learn from a father whose children manage to smile through tedious and demanding exercise, and maintain proper etiquette as well. Chris is a model citizen, and I’m sure his family will have no choice not to be.

A week later, I ran into Chris and his family again in the very same spot and at approximately the same late afternoon hour as they jogged toward me. This time I was prepared.

I waved and the boy pulling up the rear, probably 10, nodded at me and waved.

I’m sure if I ever accused Chris of being a model citizen, he’d disagree.