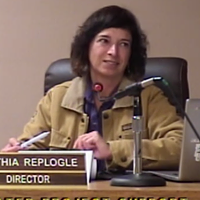 Since I joined the Oceano Community Services District (OCSD) Board in 2018, I’ve been working to make our meetings more accessible and inclusive.

I firmly believe in participatory democracy and that government bodies should always act in the open, making every effort to inform constituents on the issues while involving them in decision making. I also believe – as an attorney and former engineer – that it is important to thoroughly analyze issues which come before the OCSD Board.

Sometimes that means challenging the staff reports or the views of the board majority, but I always strive to do so in a respectful manner that promotes dialogue and a diversity of perspectives.

I had hoped that the majority of the OCSD Board would share these perspectives of openness, accessibility, and inclusivity. However, at the OCSD meeting on Dec. 11, the board majority demonstrated the opposite.

Specifically, they took actions that stifled speech and muffled diverse perspectives, including (1) barring me from holding any committee assignments for 2020; (2) dividing up the committee assignments so that only the members of the board majority received voting, paid positions (leaving board member Villa, the only non-white director who represents a town that is half Latinx, with only non-voting, unpaid assignments); and (3) dissolving my Social Media Technology Outreach Ad-hoc Committee (which had unfinished business to make meetings accessible for the hearing impaired and those not fluent in English).

The result was that most of the committee assignments are held by the two directors from Halcyon – a town of about 100 people. By contrast, the almost 8,000 people of Oceano are left underrepresented in committees and thus deprived of fair representation.

These OCSD actions are not only troubling from a good-government perspective, they may also be legally improper. For example, under the Brown Act, no action may be taken on any items that are not agendized and made available to the public 72 hours before a meeting. Two actions taken by the OCSD Board were not properly agendized.

The Brown Act also prohibits a quorum of officials from communicating about a matter in advance of a public meeting. Based upon the interactions at the December meeting as well as prepared statements brought to the meeting, this element of the Brown Act also might have been violated.

In addition, the OCSD actions could be a violation of the California Voting Rights Act (CVRA). Several local jurisdictions have faced litigation under the CVRA for having a governing body that is not representative of those governed. As a consequence, those jurisdictions have paid significant attorneys fees and other costs, and have often moved from at-large elections to by-district elections.

The majority’s actions and their consequences are fodder for anyone – who doesn’t live in Halcyon – to bring a CVRA lawsuit against the OCSD.

Lastly, the OCSD action may be simply a matter of the denial of freedom of speech. I didn’t always agree with the Board majority, and I said so publicly – but I did so respectfully. And in the public arena, I always made it clear that my views were personal and not representative of the board.

For that, I was punished by being kicked off committee assignments and by elimination of the Social Media Technology Outreach Committee, which I headed. Statements made at the December meeting made it clear that, in fact, my dissent was exactly why I was being denied committee membership.

Director White’s motion to refuse me membership on any committee was based upon my “continued protest and opposition to actions taken by this board.” Director Gibson went further, stating that after the board’s vote on any item, “if you disagree with it, you can be mute.”

I was not barred for any malfeasance, nor for failing to perform my duties. Instead, I was barred as punishment for speaking my own truth as a citizen.

It is my sincere hope that the OCSD Board majority will recognize that it made numerous mistakes at the December meeting, and that we need to hit the reset button to correct them. Committee assignments should be allocated fairly among all five Directors to ensure that all community members are adequately represented.

The Social Media Technology Outreach Ad-hoc Committee should be allowed to continue its work. And Directors White, Gibson and Austin should acknowledge that free speech is for everyone, even for people you don’t agree with