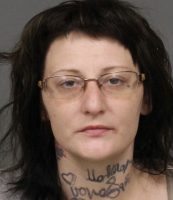 A woman who previously witnessed a local murder allegedly attempted to escape San Luis Obispo County Jail custody last week by climbing through the ceiling of a local hospital bathroom.

On Jan. 9, inmate Ashley Marie Moss complained of a nose bleed. Deputies then transported her to Sierra Vista Regional Medical Center for treatment.

While at the hospital, Moss allegedly removed a ceiling panel in a bathroom in her attempt to escape. A deputy captured Moss several feet away.

On Jan, 3, Atascadero police arrested Moss and booked her into jail on charges of burglary, grand theft and criminal conspiracy.

Moss is now facing an additional charge of escape.

In 2015, Moss witnessed the murder of her friend Marshall Savoy, who was shot and killed by Thomas Yanaga in Paso Robles. Moss testified against Yanaga, who was sentenced to 40 years in prison for second-degree murder.