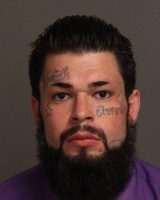 Morro Bay police arrested a convicted felon early Sunday morning after a traffic stop revealed the man was in possession of a gun and drug paraphernalia.

Shortly after 1 a.m., an officer stopped a vehicle Jesse Franklin Cornelison, 30, was driving in the 700 block of Quintana Road. Police determined Cornelison was driving with a suspended license, in addition to being a felon in possession of a firearm and drug paraphernalia.

Officers arrested Cornelison and booked him into the San Luis Obispo County Jail. Cornelison is not currently in custody, according to the county sheriff’s office website.