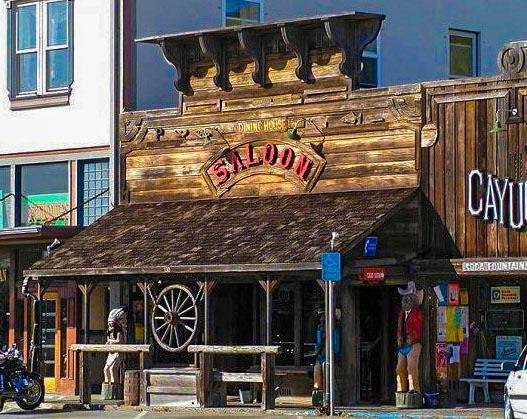 Once upon a time, and especially when I first moved here in the late 1980s, the Cayucos Tavern rocked like no other bar in the county. Of course, during this time many bars in the county rocked, including Harry’s in Pismo Beach and Happy Jack’s in Morro Bay.

These bars were not for the timid, but they contained every enticement possible if you wanted to drink and party, and I mean really drink and party—to the extreme.

But none compared to the Cayucos Tavern, a watering hole so full of energy and personality and raucous characters that the moment you entered its booming premises you knew you were entering a happy time, a fun time, and, best of all, a wild and crazy time.

And it was a different time, a time when Cayucos had not yet become a tourist draw, yet had a bar that was a draw for drinkers who came from places like Los Osos and Morro Bay and San Luis Obispo an bar-starved Atascadero and Paso Robles. Cal Poly students of drinking age arrived in groups on Friday and Saturday nights, ready to whoop it up on the dance floor as bands like Big Daddy’s Blues Band and Pacific Mocean and the Ripsters and Shameless beat the drums and twanged the guitars and bleated horns while lead singers wailed into the night, providing a beacon of rollicking joy in a town otherwise asleep at night.

These days, on weekends, Cayucos is asleep at night, and especially late at night, hours when the Tavern no longer has bands, because locals seldom go there anymore save a few regulars and the occasional weekend scattering of visiting Valley die hards.

The Cayucos Tavern is no longer the primary drinking and partying destination in San Luis Obispo county. In fact, the Cayucos Tavern is not even the drinking destination of Cayucans, because the kind of folks who once drank in the Tavern are long gone, priced out of the rental and home purchasing market; and replaced by mostly vineyard-touring wine tasters savoring fine vintages on their terraces and in front rooms or at the Schooner’s Wharf, where there’s a view.

Sadly, Cayucos (except for the 4th of July) is not much of a drinking and partying beach town these days. And, as for the Tavern, well, many of it’s wildest yet most loyal and colorful customers have been 86’d for life by its owner, who has done little to improve the décor and health of this magnificent old landmark of a bar and exercised no promotions to bring anybody in.

Yet, it is not all the owner’s fault. The dying of a bar has to do with its population, and in Cayucos, the population has dwindled as fewer and fewer rentals exist, and people with too much money and effete tastes seldom live permanently in their mini mansions. In short, the working-class has gradually vanished, so that the framers and carpenters and house painters and plumbers and landscapers and electricians and crew of original cowboys have moved inland, where it is affordable.

Once upon a time… in the Tavern, there were $1.25 shots of Jack any time you wanted them. Once upon a time…in the Tavern, there were people who signaled you to join them in the john and packed your nose with cocaine (decades ago under previous ownership), the ideal bar drug in that it brings out the generosity and sharing in the tight-wad and loosens the tongue of the tongue-tied and somehow provides an instant jolt of hapless stupid giddiness and, at times, bullet-proof jubilation.

Once upon a time…in the Cayucos Tavern, guys and gals got laid! The owner of the bar at that time, who is no longer with us, made sure a few golden rules were enforced: Regulars received the occasional free drink; the music was never turned off or turned down; bartenders were competent, attractive personalities who put customers first; and ladies of every size, shape and age were treated like queens and protected by the staff.

During the heyday of the Tavern, I lived two blocks away for several years. As a bartender from Happy Jack’s in Morro Bay, I did my boozing in the Tavern and only the Tavern. Once, in a field that is now a three story group of shops and rental suites called Pier View Plaza, I found myself passed out in the wee wee wee hours, face smothered in dirt and tall weeds. Nobody bothered me. I straggled home.

Once, when I lived at 1025 Pacific, as I wobbled in a listing gait along that street after 2 in the morning, the Sheriff’s cruiser pulled up and an officer asked was I okay.

“I’m the bartender at Happy Jack’s and it’s my night off and I’m on a mission and two blocks from home,” I warbled.

They laughed and told me to be careful and not hurt myself instead of running me in on a drunk in public, which they could have.

There are stories about the Cayucos Tavern so bizarre and outrageous and hilarious and disgusting and revolting and debauched that they’re unfit for this page. But those of us who once upon a time drank in the Tavern felt safe and snug, and despite the large crowds butting up against one another, there were seldom fights, and if things grew tense, doormen and customers managed to herd the brawlers outside to fight in the street.

Once upon a time…in the Cayucos Tavern, there was a sense that we were on our own, miles away from strict authorities (The Sheriff only made a couple passes through Cayucos over a 24 hour period), a sort of detached outlaw mob of benign, beloved reprobates free to clamor and ramble about until we were squeezed out onto the street at closing time, and often the party continued at somebody’s apartment.

One of the Tavern’s mainstays and perhaps its biggest imbiber, who sunk most of his paycheck into its coffers, who is now known as the Pirate, and is 86’d from the Tavern for life, and has since settled in as an institution at the Schooner’s Wharf across the street, would become so liquored up that the owner, Bill Larkin, let him sleep on the cushioned seats against the wall after closing time, knowing he would rise around 7, start the coffee, have a cup, and walk across the street to Skipper’s for a bacon and egg sandwich to eat in his truck in the south lot before going to work as a stone mason and plasterer.

Once upon a time… in the Cayucos Tavern, you knew, before you left your abode, before you even stepped into the bar, and heard the heavy rumble of voices, the music, the laughter, that somewhere inside was an entertainer/bartender like Brad, a drinking buddy like brawling Jim Allen, and a more than friendly welcome from familiar faces ready to roll.

One Comment about “The Cayucos Tavern, once upon a time”