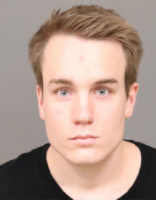 A driver slammed into two pedestrians on the Cal Poly campus and then left the scene without stopping, surveillance footage shows. [Mustang News]

The driver, a Cal Poly student, is now facing felony hit-and-run charges. The victims survived the incident with moderate injuries.

On the evening of Jan. 18, Cal Poly student Corban Kinloch, 20, was driving on the university campus near the Performing Arts Center. An 18-year-old male and 19-year-old female entered a crosswalk and began crossing the street when Kinloch’s vehicle slammed into them.

Surveillance footage shows the two teenage pedestrians being thrown onto the street or sidewalk upon impact. The vehicle continues driving and without stopping and leaves the camera frame.

Responders transported the victims to the hospital, and officers later arrested Kinloch, who was booked him in San Luis Obispo County Jail. Kinloch is no longer in custody, according to the county sheriff’s office website.