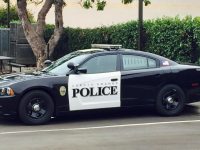 After allegedly embarking upon a crime spree in Santa Maria and successfully fleeing officers chasing them on Highway 101, a group of five juveniles physically assaulted and robbed a custodian at Arroyo Grande High School on Tuesday evening.

The five juvenile suspects are all from Santa Maria, according to the Arroyo Grande Police Department. By late Tuesday, authorities had caught four of the five suspects.

Shorty before 8 p.m., the five juveniles approached a custodian near the high school tennis courts located by the intersection of W. Cherry and California streets. The suspects physically assaulted the custodian and stole several of his personal belongings, police said.

The janitor suffered non-life threatening injuries and received treatment at a local hospital. The suspects fled the scene in a gray four-door sedan.

Arroyo Grande officers and detectives worked with high school administrators in an attempt to identify the suspects. Investigators determined that earlier in the day, a crime spree involving several robberies and a carjacking occurred in Santa Maria.

Police say there is no correlation between events that were taking place at Arroyo Grande High and the time of the robbery. Arroyo Grande police plan to file charges of robbery and assault with a deadly weapon against the juvenile suspects.