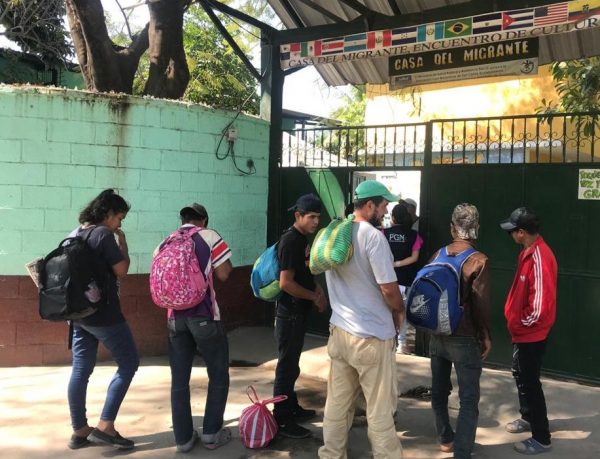 CIUDAD HIDALGO, Mexico — Many migrants — some determined to make it to the United States and others merely wishful of doing so — have run into a roadblock along their trek north. The barrier is not President Donald’s Trump’s wall, but rather an increasingly fortified border much farther to the south.

For many years, California’s border with Mexico has been at the center of immigration-related controversies in the United States. But, with the Trump Administration taking a tough stance on illegal immigration, and pressuring Mexico to do the same, a new flashpoint is emerging: the Mexican-Guatemalan border. 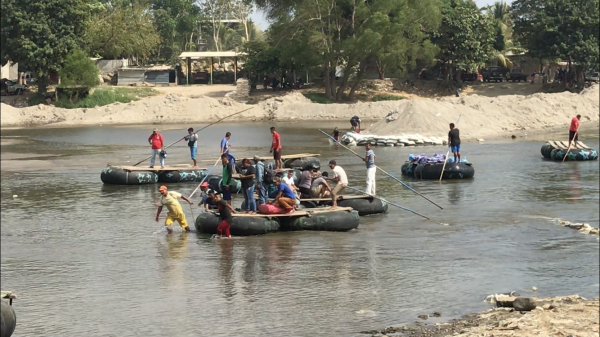 The Suchiate River, which forms a section of the border between Mexico and Guatemala

In response to a tariff threat issued by the Trump Administration, the Mexican government opted to crack down on Central American migrants transiting Mexico to the United States. This toughened stance became evident in January when Mexican troops broke up a migrant caravan from Central America as it attempted to cross Mexico’s border with Guatemala.

A CalCoastNews reporter arrived at the Mexican-Guatemalan border less than a week following the clashes. Numerous migrants remain in the area.

Most of the migrants who spoke with CalCoastNews say they are seeking a new life with better opportunity. Many recount personal hardships, such as poverty and deaths of close relatives. But unlike those on migrant trails in Europe, for instance, few, if any, speak of facing imminent death in their home countries, hence raising questions as to whether they would have legitimate asylum claims.

The situation on the Mexican-Guatemalan border

Despite Mexico largely succeeding in repelling the caravan — and, in the eyes of some, using unnecessary force to do so — migrant flows have not stopped. 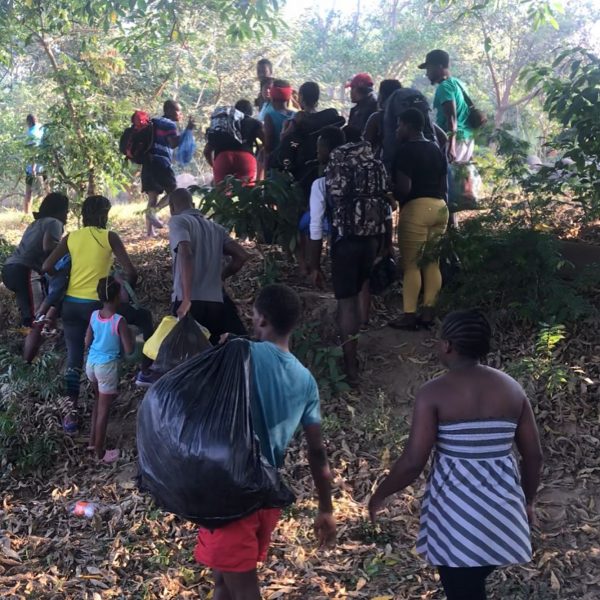 Migrants, possibly from Haiti, preparing to cross the river

In late January, dozens of new migrants arriving in Tecun Uman, the town on the Guatemalan side of the border. Some of the newly arriving migrants said they decided to make the journey after hearing about the caravan that had just made its way up through Central America. Some others said they were part of the caravan or journeyed separately but arrived at about the same time.

A few suspected smugglers led a group of several dozen migrants across the Suchiate River — which forms the border between Guatemala and Mexico. Several smugglers threatened the reporter and his fixer over filming the migrants crossing the river border.

Unlike most migrants spotted in the area, the ones filmed crossing the river did not appear to be from Central America. All members of this group had dark skin. It also appeared they spoke creole, rather than Spanish.

When asked, one of the migrants said the group was from Haiti. Most other members of the group refused to answer any questions.

The United States is the preferred destination of most migrants stuck in the area. Some, however, are losing hope in the aftermath of Mexico’s recent crackdown on the migrant caravan. Some of the migrants say they are considering returning to their homes in Central America; others are pursuing residence and work opportunities in Mexico or Guatemala; and some remain determined to make it to the United States.

A few migrants who gave interviews to CalCoastNews said they have previously been deported from the United States.

Some migrants discussed problems with gangs, violence and mistreatment by police in their native countries. However, more migrants cited poverty and the need to find work and receive higher pay as reasons for pursuing a new life in the United States or elsewhere.

It was also common for migrants to say they hope to make money in the United States in order to help their families back home. 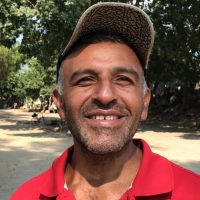 Pedro Paul Flores Melendez, 50, a migrant from El Salvador, said it may not be safe for him to return to his home country because he is a former police officer. However, Flores Melendez also said he blew the big opportunity he was given to live in the United States and do construction work. He was previously deported because of alcohol and domestic violence offenses, Flores Melendez said.

A man from Honduras, who said his name is Hilario, said his cousins killed his brother and tried to kill him. The man also said he does not make enough money in Honduras and would like to move to the United States, and particularly, to Seattle. 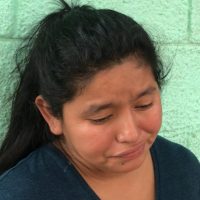 A 21-year-old woman from El Salvador, who said her name is Areli, wants to live and work permanently in the in the United States. Areli said she is struggling to cope with the death of her mother, and she would like to bring her family to the United States, when she has the financial means to do so.

The Central American migrants encountered in and around the border tended to range from about 20 to 50 years old. There were some teenagers, as well. Males significantly outnumbered females.

Fixer David Mazat, a native of Guatemala, said it was clear the majority of the migrants had low levels of education and few, if any, spoke English proficiently.

“Most of the migrants showed a low level of education,” Mazat said. “The English level seen among the migrants was drastically low, even for people who have spent some time before in the United States. They manage to understand, but they are not able to hold an intellectual conversation.”

Among the group of migrants spotted crossing the river, there was a greater mix of males and females. The group also contained some young children and at least one pregnant woman.

Currently, the situation along the river is quite calm, though there are migrants waiting for an opportunity to cross; smugglers operating in the area; and Mexican National Guard troops positioned on the shore. 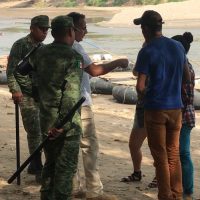 One man on the Guatemalan side offered to transport a CalCoastNews reporter across the river for approximately $13. He said he would coordinate with someone on the Mexican side in order to cross at a time and place where they would not be spotted.

In addition to National Guard troops, there are also Mexican immigration officials carrying out checks on some of the many people who cross the river daily. Throughout the day, many people transport goods from one side to the other, and locals effectively have a free pass to go back and forth between the Mexican and Guatemalan sides. 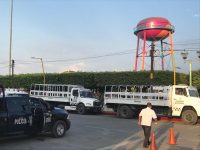 On the Mexican side, there is also a large National Guard and federal police presence in the border town of Ciudad Hidalgo. Mexico has carried out numerous deportations in the aftermath of the arrival of the recent caravan.

Yet, there is a possibility the situation will escalate again soon. Several migrants said, and some media reports indicate that another caravan — this one dubbed the “Devil’s Caravan” — is now on its way from Honduras and El Salvador to the Guatemalan-Mexican border.

It is unclear whether a new caravan will indeed make its way to the Mexican-Guatemalan border. But if it does, fresh clashes are expected to occur at what is an emerging hotspot in a migrant crisis that spans North and Central America. 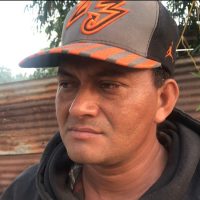 A man from Honduras who identified himself as Hilario. He said his cousins killed his brother and tried to kill him, and he would like to move to the United States for economic reasons, as well.

A man from Honduras who said he spent more than a decade in Miami prior to being deported from the United States.