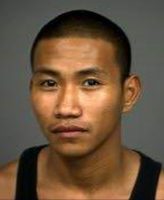 Nearly a decade after the initial crime occurred, a Santa Maria man has been convicted of sexually molesting a then-pre-teen girl in Grover Beach.

When Jay Vee Batul Estoque was 20 years old and the victim was 11, he sexually molested the girl multiple times, according to a San Luis Obispo County District Attorney’s Office. Court documents, however, suggest the girl may have been 10 years old when the initial crime occurred.

Estoque, now 29, sexually assaulted the then-pre-teen girl multiple times between Jan. 2011 and December 2012, according to court records. The victim did not report the assaults to to Grover Beach police until March 2018, when she was 17 years old.

A court hearing will take place Wednesday to determine whether Estoque will be retried for the counts on which the jury failed to reach a verdict. Estoque’s sentencing hearing is scheduled for March 4.

“This young survivor demonstrated tremendous courage by reporting the crime after its effects were truly realized,” Dow said. “We are optimistic that this conviction will encourage victims of sexual assault to the report the conduct to law enforcement, even when substantial time has passed since the event.”

Estoque is currently being held in SLO County Jail without bail.