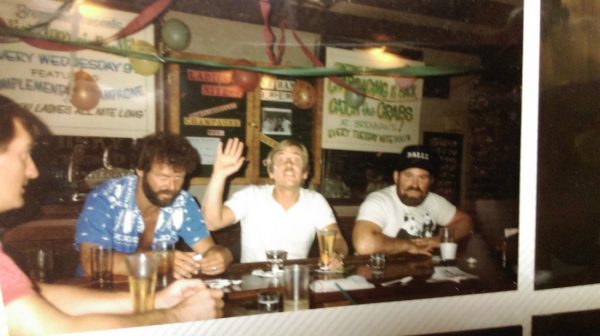 Happy Jack’s in the late 90s

Bob “2-Beer” Bullnair refuses to listen to reason, especially if he’s into his third beer. 2-Beer works exclusively for Rafe Monk, captain of the Mary Anne. He is around my height of just under 6 feet, but at least 200 beans of non-defined farm-boy strength that is the awe of fellow fishermen, for 2-Beer will outwork, out-lift and outlast anybody on the waterfront.

His midwestern pie face owns tiny black eyes that are pathetically sincere,
especially when he hits on women before his second beer. He is totally honest, trustworthy and earnest, will do anything for anybody, is intelligent and has a degree in engineering from the University of Iowa, and yet here he is, a deckhand in Morro Bay, living in a windowless shack and unable to get laid and avoid beatings.

On this Sunday evening, 2-Beer’s button eyes are pinpricks inviting disaster. He wants a beer but I know we’ll all be in big trouble if I serve him one, and so, for the twentieth time, to distract him, I ask him why he ended up fishing in Morro Bay when he could be a serious person with a high-paying job in the grown-up tech world.

“I don’t wanna be like other people and do what other people do,” he tells me. “I do what I wanna do. And don’t you go mentioning my college degree again. I want people to think I’m stupid, but you know I’m not. You probably think yer smarter than me, cuz yer a wise-ass, and you write for that shitty paper, but you’re not as smart as me. All you can do is tend bar and write shit. Otherwise, you’re good for nothin’.”

“Anybody can drive a cab.”

“Not everybody can drive a cab. It’s harder than you think.”

“Bullshit. If you can do it, anybody can do it.”

“I could so. Anybody can tend bar.”

“Not you. A bartender needs diplomatic skills. You argue with everybody. You have no social amenities. You can’t be around booze without drinking, and you’re an idiot of a drunk. And you can’t fight.”

“Bullshit. I’ll kick your ass. I was on the high school wrestling team and won my matches, went to the state championships. The Midwest is wrestling country. I’d squeeze you into a pretzel.”

“You only fight when you’re drunk. Two beers and you’re helpless. You have no idea how many times I’ve saved you from a beating, but you never remember, because three beers and you black out. Rafe, your deck mates, they all have to watch you like hawks when you go up the coast. You go in bars like this, where nobody knows you, somebody’s gonna beat your ass into a bloody pulp.”

“I’m not gonna serve you a second beer. Know why? There’s women in here, and women are always your natural enemy. Especially after two beers. I mean, you might even get laid in this dive if you had just one beer, or smoked a little weed.”

“Who are you? My social director? My shrink?”

“I know you do, but that doesn’t mean I hafta accept your protection or you caring about me. I’m my own man. I’m not a boy. I’m thirty two years old. Besides, I’m unimpaired, and indestructible. I can take more punishment than you’d ever take, Mr. know-it-all- tell-everybody-their-business bartender. Now gimme that beer, if you don’t mind, sir.”

“What are you gonna do if I don’t give it to you?”

He cracks his innocent Howdy Doody/Alfred E, Newman grin. “You know I’d never hurt you. You know the second beer I’m okay. It’s the third one I run into trouble.”

“My guess is you’ve had more than one in your dump or in other bars before coming down here.”

“I saw you coming out of Legend’s.”

“They wouldn’t serve me. I’m eighty-sixed.”

“Don’t call me 2-Beer. I hate that name. It demeans me. I’m an educated person and I deserve dignity, you arrogant fucker. My name’s Bob Bullnair. Serve me!”

I walk away. 2-Beer looks especially persecuted, tells Homer Carp and Joe Farraday, who sit nearby, he’s being picked on because he’s a proud Native American Indian. He’s only -one-quarter Osage.

Finally, he’s at the front door. He hisses at me, scrooches up his face to show his revulsion at the mere sight of me, and gives me the finger in a very exaggerated, menacing manner, and shouts, “I’m goin’ down to the wharf where they respect me, asshole. Fuck YOUUUU!”

He storms out through the swinging doors. Homer, at the end of the bar, flashes his grin, which looks like his teeth are a bunch of misshapen nails protruding from bulbous lips. Farraday, who sits beside Weasel Frazier, displays his grin, which resembles a dog sneering.

Beer Can Bessie shows up and takes her usual stool up front and as far away from the crowd as possible and orders a bottle of beer. We exchange the usual hugs. I light her cigarette with our bar matches, which have no logo on the cover. It’s raining hard outside and she has on her overcoat and hat and doesn’t bother to remove them. She just got off work as an RN at the emergency room at a hospital in San Luis Obispo.

Vera, Carp’s live-in woman, diminutive but known for her ferocious manner as “The Wolverine,” comes in through the back door, walks around Homer without acknowledging him or his friends and sits beside Bessie as I draw her a beer and light her cigarette.

I sip a shot of top-shelf vodka while they talk. I fetch and devour a burrito from down the street. I’m savoring a Kahlua/coffee when Mike, who manages the Pizza Port two blocks down, calls.

The Pizza Port has a rustic dining room and an enclosed patio with tables and serves pitchers of beer, and evidently 2-Beer came in claiming I’d sent him down. Mike served him a pitcher of beer and he began bothering some gal who was with a framer called Ortho. When 2-Beer hissed and insulted his girl, 2-Beer got his pitcher dumped on his head and then got slaughtered before a few regulars pulled Ortho away and Mike and the crew threw him into the street.

Bessie and the Wolverine turn to see 2-Beer stagger through the front doors looking like he stuck his face in a garbage disposal. His T-shirt is torn half off his body and his hair is soggy with beer and rain as he sidles up to the bar while I hold the phone, his eyes little nasty lasers.

“Do me a favor, Franklin,” says Mike, on whose Pizza Port sponsored basketball team I once played point guard and helped lead them to their only city league championship and lone trophy. “Don’t ever send that lunatic asshole down here again, okay?”

“I didn’t send him down there, Mike. I wouldn’t sic 2-Beer on my worst enemy.”

“He said you told him I’d serve him because we’re big hoop buddies.”

“I never said any of that, Mike. I’d never pawn the puke off on you.”
2-Beer yells at me, “Gimme a beer, you Goddamn bunion!”

“Oh, I see you got the moron now, huh? He ran everybody out of here. I’m talking families with kids. Thanks a lot, pal. Maybe I’ll send one of my blacked-out drunks to your place, huh?”

“I gotta go, Dell. I got a mess to clean up. Thanks for sending that crazy person to my establishment and ruining our good name, I really appreciate it.”

After hanging up, 2-Beer is sort of draped over the bar, eyeing me up with persecuted malevolence, blood dripping from his nose and swollen, cut lips, face slack. “How about some coffee, Bob?” I say to him.

“How about some cawww-fee?” he mocks sneeringly. “Don’t try an’ schmooze me. Don’t try an’ outsmart me, cuz yah can’t, yah bunion.”

“Why you calling me, of all things, a bunion, Bob?”

“I got no frenz…damn you, pus-face, I want my fuckin’ beer!”

“You settle your dumb, sorry ass down,” Bessie says quietly.

Still draped over the bar, his head turns like a turtle’s toward Bessie. “Who the fuck are you?”

“Who you callin’ a dipshit?” he says defensively.

Bessie calmly appraises him. “When’s the last time you got laid, stupid?”

“You haven’t been laid in years. You gotta pay for it, like a beggar, though I doubt even the most desperate, drug-ridden whore’d have you. You’re uncouth. A loser.” She takes out a new cigarette and I light it. She blows out smoke. “Poor stupid fisherman. Eat your poor lonely heart out.”

She takes a slug of her beer. Turns back to me. “Give him a beer. I’ll take charge.”

2-Beer gazes at me, mouth agape, horribly bloodshot eyes terribly confused. I draw him a draft. He looks at it.

2-Beer mutters, “My name’s Bob Bullnair and you can kiss my white ass.”

“Oh, that’s real intelligent. You’re a scholar as well as a boor.”

2-Beer takes a swig of his beer—half of it trickles down his throat. Everybody’s looking on. I turn down the jukebox. Freshen up my shot. Lean back against the bar. These are golden moments, make the job worthwhile.

“Intelligent? I got a diploma from the University of Iowa, white-trash bitch. Whatta you got? Look like a homeless wench t’ me.”

Bessie snuffs out her cigarette. Finishes off half a bottle of beer, puts it down; studies 2-Beer, who gapes at her, licking his bloody, sliced, swollen lips. “I guess we’ll have to see about that,” she says. She tosses some bills on the bar, squeezes the Wolverine’s arm, stands and walks over to 2-Beer.

She withdraws a hanky from her purse and dabs at his face. 2-Beer watches her, half standing now. She looks him up and down. Puts her hanky away. “Look,” she says. “If you just shut your trap and follow me out the door like a good dog trying to please his master, you might just get lucky. You up to it, dipshit?”

2-Beer straightens, teeters. He nods. He swigs his beer, most of it streaming down his neck. He flashes his goofy grin. Bessie snags him by his torn T-shirt and tows him lurching out the door while everybody cheers and claps. I lift my shot and bolt it.