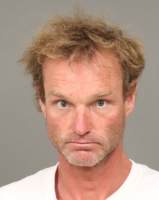 A surfer who was participating in a competition in Morro Bay allegedly assaulted an elderly woman on Saturday while under the influence of drugs.

At about 1 p.m., Brian Robert Sprinkle, 39, of La Jolla exited the water near the Morro Rock parking lot, and without provocation allegedly knocked the elderly woman to the ground, according to the Morro Bay Police Department. Numerous bystanders witnessed the attack and intervened to help the woman, who suffered moderate injuries.

Officers arrived and arrested Sprinkle on charges of battery and elder abuse. Additionally, police located and seized a firearm that Sprinkle possessed.

Investigators believe Sprinkle was under the influence of marijuana and hallucinogenic drugs.

Officers are asking anyone who has information about the incident to contact the Morro Bay Police Department at (805) 772-6225 or Crime Stoppers at (805) 549-STOP.