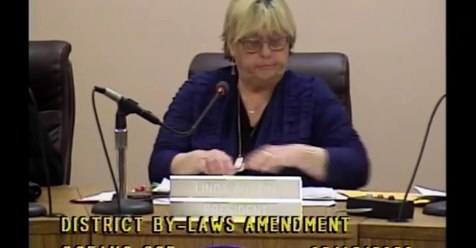 During a discussion on rules of decorum at last week’s Oceano Community Services District meeting, President Linda Austin became agitated at another board member’s suggestion and attempted to squelch the director’s voice.

Austin began the discussion on civility and bylaws by warning members of the public that she could have them removed from the meeting if they made disrespectful or disruptive comments towards others. Director Cynthia Replogle then asked about adding language requiring service dogs to be on a leash while at board meetings.

Austin responded saying, “The dog was on a leash. I am not going to go into it.”

Specifically, Austin was referring to a 90 pound Rhodesian Ridgeback owned by Clark D’Souza. In 2017, Oceano district staff requested a restraining order against D’Souza because of his “hostile and extremely agitated” behavior. The staff complaint also detailed the aggressive behavior of D’Souza’s dog. The court granted a temporary restraining order that lasted from June 25, 2017 through Aug. 3, 2018.

Replogle said she wasn’t speaking about a specific dog, but service animals in general.

Austin appeared to ignore Replogle, voiced support for D’Souza, and banged her gavel while saying, “We’re done. We’re moving on.”

“Are you gaveling down a fellow director?” Replogle asked.

“I said we’re done talking about it,” Austin responded

Replogle then asked attorney Jeff Minnery about adding language requiring service animals to be on a leash in order to protect the district from legal liability.

The board continued their discussion on bylaws and decorum to Feb. 26.