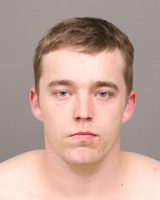 At about 2:40 a.m.,  Chase Allan Calvin forced his way into Tonita’s Mexican Grill at 1024 Nipomo Street. Inside, Calvin challenged an unknown victim to a fight, police said.

Based on witnessed statements, the victim did not know Calvin. The victim left the restaurant, but Calvin followed him outside and into the street in front of Tonita’s.

Another man, who appeared to know Calvin, then joined the altercation. The unidentified suspect pulled a gun out of his waistband and fired it toward both the victim and the restaurant.

None of the gunshots struck any people.

Officers arrived and searched for the suspects. They located Calvin in the 500 block of Higuera Street and arrested him on charges of vandalism and possession of brass knuckles.

Investigators describe the gunman as an approximately 20-year-old man who was wearing tan pants, a long sleeve flannel shirt and a white undershirt.

The police department is asking the public for help identifying the victim, whom they describe as a white man in his 20s who was wearing a tan beanie, tan pants, light colored shoes and a red and black Levi’s sweatshirt. Officers are circulating a photo of the victim.

Anyone who can identify the victim or has information about the crime is asked to contact Detective Lozano at (805) 594-8011.