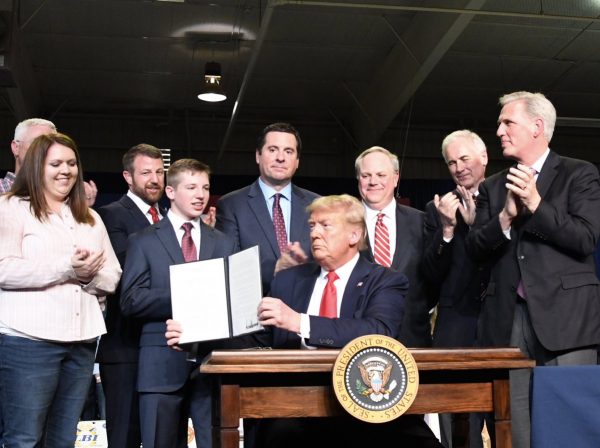 In a battle largely pitting fish against farmers, the Trump Administration and California are clashing over water policy in the Golden State. [The Hill]

This week, President Donald Trump signed a presidential memorandum intended to direct more water to California farmers. Shortly more than 24 hours later, the state of California fired back by suing the White House.

On Wednesday, Trump signed a presidential order on developing and delivering more water supplies in California. The order is expected to allow large quantities of water to be diverted from the San Francisco Bay Delta to the Central Valley in order to irrigate farmland. The plan also calls for sending more water to growing populations further south.

Prior to signing the memorandum, Trump ordered the Department of the Interior to redo biological assessments that for decades had blocked water diversion on the grounds it would harm various types of fish. In rolling out the diversion plan, Trump cited new scientific research and biological opinions from the Department of Interior.

Critics of the plan argue it will ultimately harm chinook salmon, as well as the delta smelt, a finger-sized fish that for three decades has blocked water diversion in the area.

California Attorney General Xavier Becerra responded to Trump’s order by filing a lawsuit late Thursday in the U.S. District Court for the Northern District of California.

Becerra listed a variety of reasons the new biological opinions allegedly do not meet legal requirements. One rule Becerra cited is that a biological opinion must consider not just the continued survival of designated species, but also their recovery.

The lawsuit also argues Trump’s order violated the National Environmental Policy Act because the administration did not provide the public with meaningful opportunity to comment on the diversion.

“As we face the unprecedented threat of a climate emergency, now is the time to strengthen our planet’s biodiversity, not destroy it,” Becerra said in a statement. “California won’t silently spectate as the Trump Administration adopts scientifically-challenged biological opinions that push species to extinction and harm our natural resources and waterways.”

Locally, San Luis Obispo County has faced criticism, particularly from fishermen, for directing water toward creeks for fish and wildlife. The county has dumped as much as 3 million gallons of water daily from Lopez Lake in order to satisfy environmental mandates.