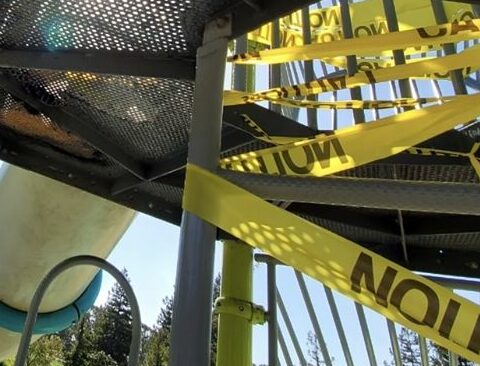 Shortly after midnight, 911 callers reported hearing what sounded like fireworks in the area of Sinsheimer Park. Officers arrived and arrested two teens while two other teens fled the scene, but were caught shortly afterwards.

Firefighters quickly extinguished the blaze, which appeared to be started with cardboard strips children use to slide down the hill. Fire damage was primarily limited to the upper climbing portions of the children’s play structure, police said.

Because the four suspected vandals are minors, their names are not being released at this time.

In October, vandals cut out and stole a large portion of the synthetic turf from the playground. The city paid about $10,000 to replace the turf, which took about two weeks for the repairs to be completed.

In December, the San Luis Obispo Parks and Recreation Department closed a slide for three to four weeks because of vandalism; the slide was set on fire.